David Moyes admitted his side played very badly in their UEFA Champions League loss to Olympiakos last night but says he takes the responsibility. 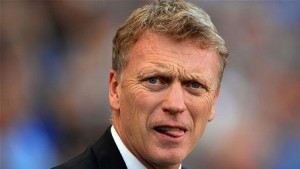 Manchester United who have had a difficult season since Moyes took over from Alex Feguson were beaten 2-0 by the Greek side leaving them on the brink of being knocked out unless they can turn things at Old Trafford.

Moyes said in a post-match interview “It’s the worst we’ve played in Europe, that’s for sure. A really poor performance tonight.

We never got going from the start and we didn’t deserve anything because of the way we played tonight.

“We just never really got to grips with things. To a man, you could hardly pick anyone out, we just didn’t perform. We came into the game in good form, a good mind set, but we didn’t show that tonight.

“I still didn’t think we were necessarily two goals worse off in the game. We had a shot that gets deflected, but we didn’t offer enough on the night.

“I take responsibility, it’s my team and I’ll always front it up. We didn’t play well tonight and we have to play better.