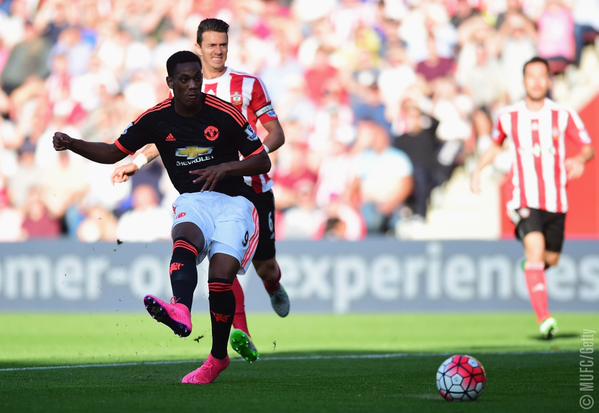 The Red Devils were on level terms in the 33rd minute courtesy of Martial on his full league debut. The French youngster latched onto a through-ball from Mata and wrong-footed Maarten Stekelenburg by feigning to shoot, before finishing on the turn.

United took the lead for the first time in the match just after half time when an under-hit back-pass from Maya Yoshida sent Martial clean through on goal, and he kept his composure to double his tally for the afternoon.

Louis van Gaal’s side extended their lead in the 68th minute through Mata, who was on hand to rifle home the rebound after Depay crashed an effort against the upright.

Pelle notched up his second of the match with five minutes to go, the Italian planting a Mane cross beyond De Gea to set up a nervy finish.

In another Premier League game played today, Liverpool were held to a 1-1 draw against Norwich.

Russell Martin cancelled out Danny Ings’s first Liverpool goal to rescue a point for Norwich City in the Premier League showdown at Anfield.