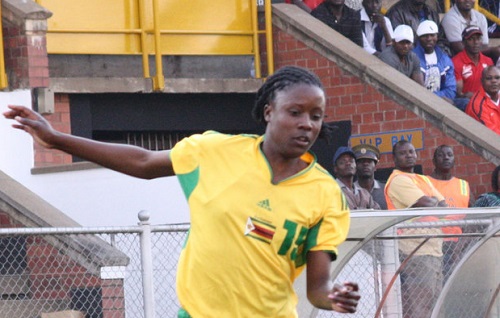 The Mighty Warriors narrowly lost 2-1 to Cameroon in a 2016 Rio Olympics final round qualifier in Yaoundé.

Zimbabwe had a great start when Rudo Neshamba opened the scoring. Zimbabwe did well to hold onto to their lead for most of the game but Cameroon fought back in the second half

It took Cameroon until the 67th minute to grab the equaliser with Ngono equalising for the home side.

Ngono then doubled the lead in the 81st minute

The squad only managed to travel yesterday morning following the intervention of Minister of Sports and Recreation minister Makhosini Hlongwane who mobilised funds for the trip.

The result gives the Mighty Warriors a chance to qualify for the Olympic Games to be held in Brazil in 2016.

Zimbabwe will need to win at home against the highly rated Cameroon in the second leg scheduled for Harare on the 17th of October.

Cameroon are on the continent’s heavy weights and qualified for the 2015 World Cup finalists and the 2015 African Games where they finished with a silver medal.