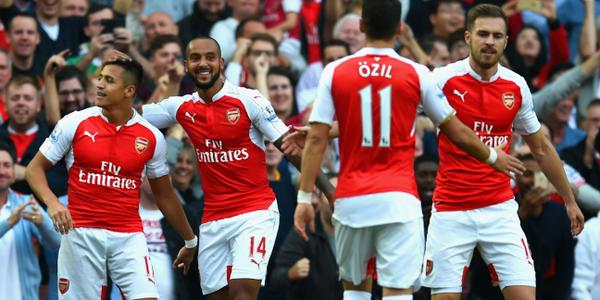 A storming first-half display by Arsenal earned them a 3-0 victory over Manchester United at the Emirates Stadium.

The win lifts the Gunners above their rivals into second place in the Premier League table on goal difference, and leaves them just two points adrift of pacesetters Manchester City ahead of the two-week international break.

All three goals came inside the opening 20 minutes of an incredible first half in North London, as Arsenal put on a display all-too-rarely seen so far this season to blow their opponents away. Sanchez netted two while Ozil scored the other.

Everton and Liverpool met in the Merseyside derby at Goodison Park in their Premier League clash.

Danny Ings put the Reds ahead in the 41st minute, but Romelu Lukaku struck on the stroke of half time to equalise for Roberto Martinez’s side.

The Toffees upped the ante in the second half, but could not find a winner as the rivals shared the spoils in the 225th derby match.

Swansea City and Tottenham Hotspur played out a 2-2 draw.