There was late drama in the Castle Lager Premiership today as both Chicken Inn and ZPC Kariba came from behind to beat How Mine and CAPS United respectively.

At Luveve Stadium Chicken Inn looked certain to be handed a defeat by How Mine after trailing for most of the game to Thembani Masuku’s 8th minute goal. However Edmore Chirambadare struck on the 87th minute mark before Ishmael Lawe gave them all three points in added time. The win keeps Chicken Inn’s four point gap at the top intact.

At Nyamhunga stadium CAPS United were stunned by ZPC Kariba’s two quick goals in the second half, CAPS United took the lead through Joel Ngodzo well taken shot. However ZPC Kariba equalised through Raphael Manuvire via the penalty spot in the 63rd minute after Justice Jangano had handled.

Manvuvire then turned provided when his corner was headed in by Sylvester Appiah four minutes later.

At Mandava Stadium FC Platinum cruised to a 3-0 win over Whawha .Obrey Chirwa scored a brace while Elvis Moyo was on the score sheet.

At Sakubva stadium Buffaloes and Tsholotsho share the points after drawing 1-1.Tsholotsho took the lead but

Buffaloes got themselves back in the game.

Chicken Inn 2-1 How Mine 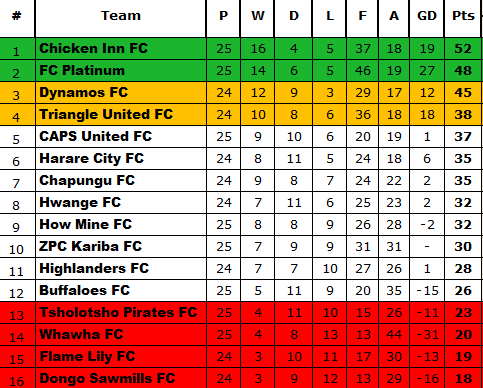