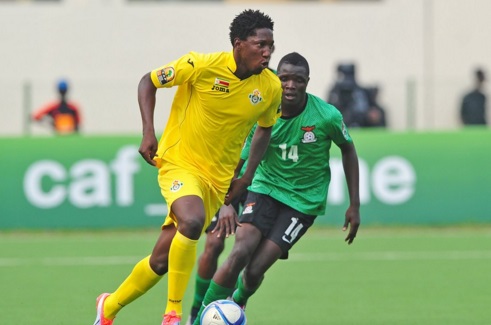 The Zimbabwe national team started their CHAN 2016 campaign on a losing note when they were beaten 1-0 by Zambia.

Issac Chansa 58th minute volley made all the difference for Chipolopolo.

Zambia gave Zimbabwe an early scare when Chris Katongo’s header went just over. Zambia settled faster and continued to probe as the game went on.

In the 12 minute Zimbabwe had their first attempt on goal when Ronald Chitiyo shot forced a good save from the Zambian keeper. The Warriors  forced three successive corners in that period.

With Zambia trying to feed the ball to the dangerous Katongo ,Zimbabwe’s defence did well to throttle incoming balls. But while the Warriors were doing well in defence they struggled to hold onto the ball and feed to their strike force as the game progressed.

With halftime approaching Edmore Chirambadare had a glorious chance to put Zimbabwe in the lead when he shrugged of his marker and was through on goal but his effort went wide with the keeper beaten.

Halftime came with the score still nil all despite the chances created by both teams.

Zimbabwe had a good start to the second half when Ronald Chitiyo goal bound effort was cleared off the line.

In the 58th minute Zambia went ahead . With Elisha Muroiwa out receiving treatment for about 5 minutes the Zimbabwe defence was caught off guard by a quick cross that found an unmarked Issac Chansa who made no mistake to beat Donovan Bernard with a well taken volley.

Zambia almost added a second with a quick move minutes later. With twenty minutes to play the Warriors upped their tempo as they searched for the equaliser and brought Dynamos striker Roderick Mutuma for Gerald Takwara

In the 72nd minute Chirambadare had another good chance to score but his shot went across  the face goal.

It was the last real chance for the Warriors as the Zambians did well to defend and set up an effective offside trap as full-time approached.

The loss sees Zimbabwe go bottom of the group ahead of the clash between Mali and Uganda.