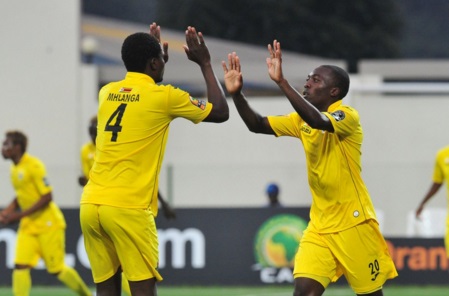 Uganda Cranes came from behind to force a 1-1 draw against Zimbabwe in the last match of Group D at CHAN 2016.

William Manondo scored for Zimbabwe in the 49th minute before Geofrey Sserunkuma responded in the 90th minute – two teams are out of CHAN 2016, after finishing fourth and third respectively.

The opening 45 minutes of the fixture played under chilly conditions had ended still goal-less as either countries started on a low tempo with a cautious game plan.

Vipers forward, Erisa Ssekisambu tested the Zimbabwean defence early in the game but his 5th minute effort was deflected for a fruit-less corner.

Rodreck Mutuma missed from inside 10 yards with a Alitho to beat. Three minutes after restart, there was hesitation in the Cranes’ backline, easily capitalized on by the pacy Manondo from close range.

Uganda rallied for at least a goal making two further offensive changes when Geofrey Sserunkuma and Edrisa Lubega came in for wingers Muleme and Ssekisambu respectively.

Lubega landed a chance to level the matters with 10 minutes to play, shooting inches wide from inside the area. Lank forward, Geofrey Sserunkuma headed home the equalizer with virtually the last action of the game in the third minute of added time.

Uganda and Zimbabwe end the tournament with one and two points respectively and are thus eliminated.

In the other Group D match, Zambia and Mali battled out to a barren draw in a group “D” match played on Wednesday 17 at Stade Regional Nyamirambo,Kigali.

The Chipolopolo who remains unbeaten in the tournament finished top of the group with seven points followed by Mali with five points.

Zambia will face Guinea on Sunday in the quarterfinals while Mali will take on Tunisia at the same stage.