Leicester continued their fairytale run in the English Premier League last night when the beat Liverpool 2-0 , while they were wins for Manchester City, Manchester United and Tottenham. Arsenal though slipped after failing to win again when they drew 0-0 with Southampton.

Jamie Vardy struck a stunning volley and added a second as Leicester reaffirmed their title credentials. Claudio Ranieri’s moved three points clear at the top with the win.

At the Emirates Stadium Arsenal saw their title chances suffer a big blow when they failed to take their chances to score leading to a goalless draw against Southampton. The dropped points saw Arsenal slip to fourth on the table behind Leciester,Man City and Tottenham.

At Old Trafford under pressure Manchester United manager Louis Van Gaal has something to smile about as the Red Devils beat Stoke City 3-0. Jesse Lingard, Anthony Martial and Wayne Rooney were all on the score sheet.

At Carrow road Harry Kane’s brace saw Tottenham beat Norwich City as Spurs continued with their impressive form. Dele Alli had given Tottenham the lead in the 2nd minute of the game. 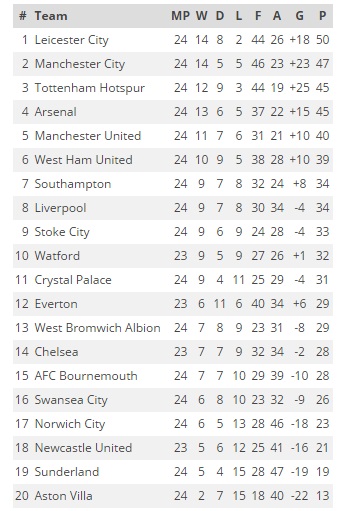