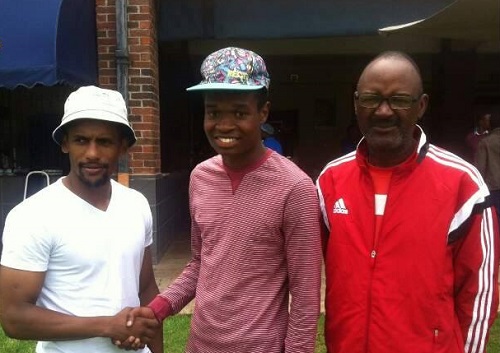 Image above: Nigel Ndlovu(centre) with Quincy Antipas and Bhekimpilo Nyoni

Young Zimbabwean player Nigel Ndlovu has left for Danish side Hobro IK after landing a deal with the club.

Ndlovu (20) was turning out for Eastern Region Division One side Hartley last season and caught the attention of Hobro IK scouts when they held trials in Zimbabwe last year.

Ndlovu is also a product of the BN Soccer Academy owned by respected coach Bhekimpilo Nyoni.

Hobro IK is home to Zimbabwean international Quincy Antipas and another fellow countryman in Tanaka Chinyara. Ronald Pfumbidzai moved to the same side but cut short his stay and returned to CAPS United.

Patriarch Princeps a football agency that Antipas owns was behind the deal and facilitated the trials held in Harare.

Speaking to Soccer24 Ndlovu expressed his delight at landing a contract with Hobro. “I’m feeling very excited for the challenge to play in Europe it’s a dream come true said Ndlovu.

“I knew I had been signed as soon as Quincy told me they were interested in me during an interview after our trials he concluded.

Ndlovu penned a year and half deal with the option of an extension.