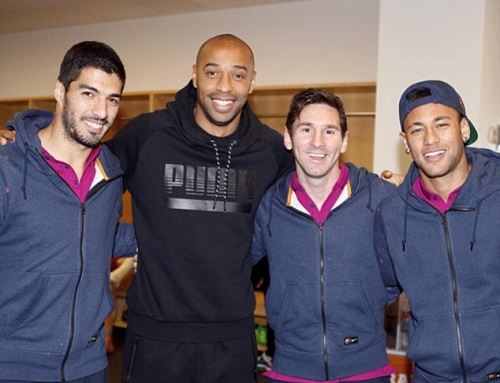 Arsenal legend Thierry Henry has revealed how the Gunners can beat inform Barcelona when the two teams clash in the UEFA Champions League.

Henry who played for Barcelona after a fruitful stay at Arsenal wrote in the Sun newspaper, “They have to accept they will probably only have 30 per cent possession and must be so efficient when they do get the ball.

“The whole team must defend more as a unit and the wingers must tuck in and play more in their own half.

Barcelona who have probably world’s deadliest trio upfront in Messi,Suarez and Neymar will be difficult to stop admits Henry.

“You very rarely get the chance to play against Barcelona so you must be prepared to sacrifice parts of your attacking game, home and away.

Arsenal have managed to beat Barcelona before at the Emirates Stadium in 2011 in a 1st leg match in the round of 16. However Barcelona beat Arsenal 3-1 at Nou Camp in the second leg.