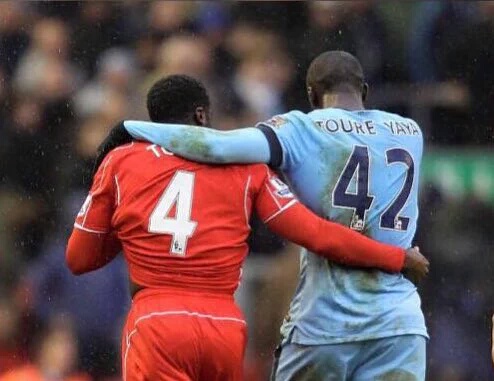 Kolo Toure says he’s ready to go to “war” with his brother in the Capital One Cup final at Wembley.

It will be the first time the veteran Liverpool centre-back has faced Manchester City’s Yaya Toure in a major final and there will be no contact between them prior to Sunday’s showdown.

“If we’re both out on that pitch then it’s going to be amazing to play against him in a final,” Kolo told the ECHO.

“I hope to face him. If not, the most important thing is that my team win.

“There will be no fraternising with Yaya before Sunday – no phone calls, no messages, no feeling.

“We are both going to war. We will both want to win and then we will talk after.”

Kolo, who is two years older than the City midfielder, admits their family will be divided.

“Yaya is closer to some, I am closer to others,” he said.

“At the end one of us will come out on top.”

The 34-year-old insists he has had no guarantees that he will start against his former club at Wembley after being left out of the Liverpool side for Thursday night’s hard-fought Europa League win over Augsburg.

Jurgen Klopp opted to play Lucas Leiva at centre-back but Toure is expected to be recalled to face City.

With Dejan Lovren struggling with illness and Martin Skrtel not yet fit, Toure is the obvious choice to partner Mamadou Sakho.