Arsenal dumped out of FA Cup by Watford 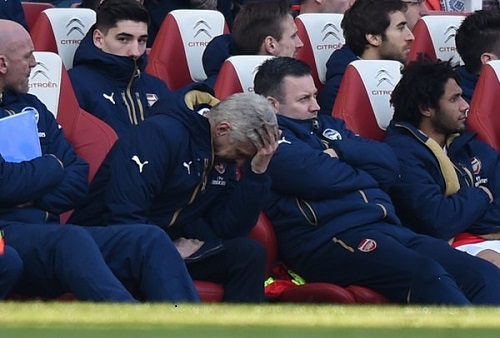 Watford have ended Arsenal’s bid for a third successive FA Cup title by beating the Gunners 2-1 at the Emirates Stadium this afternoon to reach the semi-finals of the competition.
Second-half goals from Odion Ighalo and Adlene Guedioura stunned the hosts, who pulled one back late on through Danny Welbeck, but it was not enough to salvage the defence of their crown or alleviate any pressure on under-fire manager Arsene Wenger in North London.

Arsenal had most of the chances in the first half but failed to make it count as the teams went into the half time break a nil all.

Watford then stunned the Gunners when Nigerian international Ighalo put his team ahead with a right footed striker after shielding the ball well from Gabriel.

On the 63rd minute mark Watford went two up with a screamer from Guedoira beating David Ospina in goal for Arsenal.

Trailing and facing the cup exit Wenger threw on Iwobi,Walcott and Welbeck onto the field. The move yielded positive change when Welbeck pulled one back on the 88th mark.

Two minutes later Welbeck missed a great chance after Iwobi’s shot had come off the post but his shoT went over as Watford held on for the famous win.

Watford join Crystal Palace and Everton in the semi-finals to be played at Wembley. The winner between Manchester United and West Ham will determine the fourth semi-finalist.

Arsenal must claw back an eight-point gap on Leicester in the Premier League, or reverse a 2-0 first-leg deficit to Barcelona in the Champions League, if they are to keep alive their trophy ambitions.

Arsenal dumped out of FA Cup by Watford