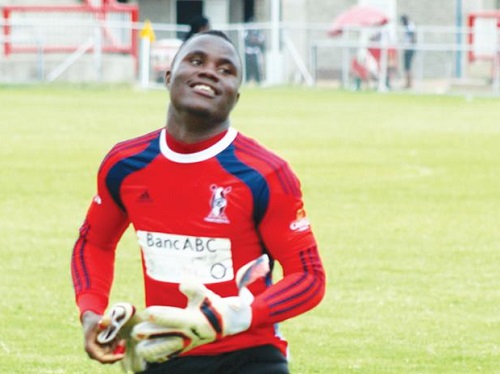 Impatience apparently cost Zambian goalkeeper Sitali Nyambwe (21) a job at Highlanders amid revelations by the club’s technical director Cosmas “Tsano” Zulu that while the shot stopper had made the grade he could not wait for his paper work to be properly processed.

“Nyambwe made the grade. He had really impressed us as a technical team but he was just impatient. He wanted to play straight away before his paper work had been fully processed. We had to let him go as he was impatient.

Everything has to be processed in a proper way. He is a good goalkeeper though but we asked him to go,” said Zulu.

Earlier in the week Highlanders CEO Ndumiso Gumede had described Nyambwe a “tsotsi” for his dishonesty after he claimed the club had failed to take care of him during his stay in Zimbabwe.

Nyambwe seemed to be already feeling at home following his goalkeeping antics that won the hearts of die hard Bosso fans last a couple of weeks ago at a Bulawayo Football Festival.

The festival which featured Bosso, Bulawayo City, How Mine and Tsholotsho FC, Nyambwe reminded many in the Bosso camp of their eccentric former goalminders Tapuwa Kapini and Edmore “Mamkhwebu” Sibanda.

His “parting” ways with saw Bosso stick to their last season’s three goal minders that include Ariel Sibanda, Njabulo Nyoni and Prosper Matutu.

“Ariel (Sibanda) is our first choice goalkeeper for this season. He is our main man and Nyoni and Prosper are second and third choice respectively,” said Ekbay.