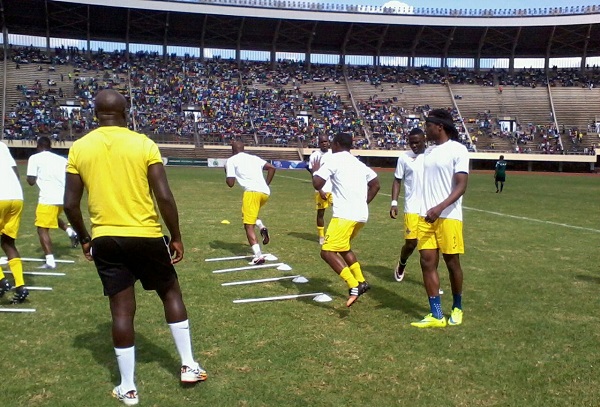 The Zimbabwe national team thrashed Swaziland 4-0 in an AFCON qualifier played at the National Sport Stadium this afternoon.

Also see : Action as it happened

Callisto Pasuwa made five changes to the squad that drew in Mbabane and the changes paid off.

Zimbabwe started the game with urgency creating the early chances with fast attacking football.Marshall Mudehwe and Kuda Mahachi made some good runs in the opening stage as the Warriors looked for the early goal.

Vitesse midfielder Marvelous Nakamba brought more creativity in the middle in the park as Zimbabwe pressed.

Mudehwe had a good chance to put Zimbabwe in the lead in the 11th minute but his weak shot was saved.

In the 24th minute Swaziland had the ball in the back of the net but after a header but fortunately for Zimbabwe the effort was ruled out for offside.

In the 35th minute Musona forced a good save after a powerful shot on target and Zimbabwe continued to press.

However despite Zimbabwe’s dominance halftime came with the score still goalless. The start of the second half saw the introduction of Khama Billit for Mudehwe. The move changed the dynamic of the game.

In the 51st minute Zimbabwe took the lead.Kuda Mahachi was brought down leaving the referee with no choice but to point to the spot. Musona scored with a cheeky penalty.

However with the pressure piling a second was on its way,and its was to be Costa Nhamoinesu. The impressive defender scored with well taken header after Billiat free-kick in the 58th minute

With the packed crowd fully behind Zimbabwe the Warriors continued to launch more waves of attack and Nyasha Mushekwi combined well to almost add a third.

Mushekwi eventually made way for Evans Rusike ,and the Maritzburg United striker wasted not time and scored barely two minutes after coming on.Swaziland’s attempt to defend saw the ball bounce off him to go in for a third.

In the 85th minute Billiat wrapped up the win after the ball fell kindly for him after some poor defending and the Sundowns winger made no mistake to score.

The emphatic victory sees Zimbabwe got top of the group with 8 points three more than second placed Swaziland and on course for AFCON 2017 qualification.