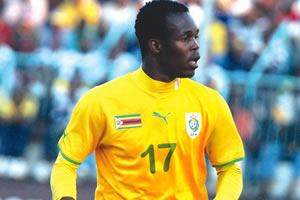 Knowledge Musona opened Zimbabwe’s scoring against Swaziland in style. Musona who finished among the top scorers in the Belgium Pro League showed his confidence with a delightful chip.

The penalty was given to the Warriors after Kuda Mahachi had been brought down. Zimbabwe scored three more goals through Costa Nhamoinesu, Evans Rusike and Khama Billiat to win 4-0 to go top of Group L with 8 points.