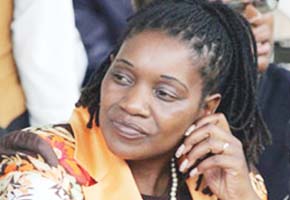 Former ZIFA Chief executive officer Henrietta Rushwaya has been granted bail in connection with her case involving allegedly attempting to bribe player to throw away the AFCON qualifier involving Zimbabwe and Swaziland.

The Herald has reported that as part of her bail conditions Rushwaya will be forced to reside at her given address whilst reporting to the CID fraud department once a week.

Allegations are that Rushwaya worked together with Edzai Kasinauyo and other officials in order to bribe players to throw away matches that also included the South African Premier League.

Rushwaya has since distanced herself from the scandal saying she was working undercover to unearth an emerging match fixing scandal.

However Rushwaya worked with Leeroy Kundishora Waguta who has turned to be the whistle blower and the major witness in the case.

The court also heard that the syndicate also involved Chan Sankran, a well-known Asian match fixer who was the financier.

As part of her bail conditions, Rushwaya was ordered not to interfere with state witnesses.