Cameroon midfielder Patrick Ekeng has died after collapsing during a game 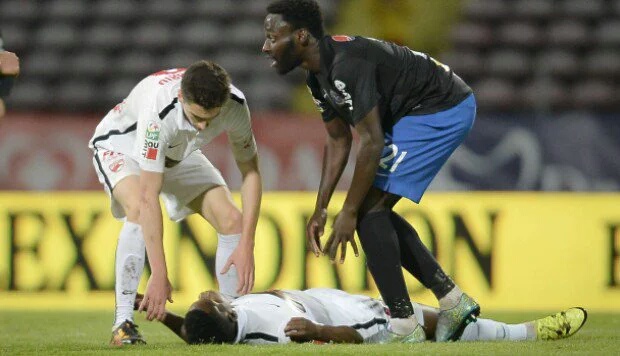 The Dinamo Bucharest and Cameroon midfielder Patrick Ekeng has died in hospital, less than two hours after collapsing during a league match against Viitorul Constanta.

The 26-year-old had been on the pitch for only seven minutes after his introduction as a second-half substitute when he fell to the floor in the 70th minute. The match was tied at 3-3 and being televised live in Romania. Local media reported that he suffered a heart attack.

Ekeng was taken by ambulance to the nearby Floreasca Emergency Hospital, which was swiftly surrounded by Dinamo fans desperate for news of a player who joined the club in January and was making his seventh league appearance.

He had scored his first goal for the club in last month’s Romanian Cup semi-final, against their city rivals, Steaua Bucharest. Ekeng had previously played in Europe for Le Mans, Lausanne and Córdoba and had seven senior caps for Cameroon.