Highlanders continued to stumble when they were beaten 2-1 by Mutare City at Barbourfields Stadium this afternoon.

Highlanders started off well and looked set to make their dominance count but it was Mutare City that took the lead in the 52nd minute when Kudakwashe Gurure caught Ariel Sibanda off guard.

With Highlanders desperately looking for the equaliser Caleb Masocha made the most of a defensive blunder by Felix Chindungwe to score the second.

Simon Munawa pulled one back for Highlanders but it was a mere consolation with the damage done already.

It was Mutare City’s 4th win of the season and saw them move into 14 place on the log table with 15 points. While Highlanders have now gone three matches without a win and lost their second game in a row. Highlanders now trail log leaders FC Platinum by six points after Week 17 matches.

At Rufaro Stadium Dynamos once again were found guilty of failing to convert numerous chances. Its the fourth goalless draw for Dembare. Denver Mukamba showed glimpses of his best in the early stages of the game but How Mine eventually settled and caused problems with Pascal Manhanga a threat for How Mine.

LLyod Mutasa brought youngsters such as Brett Amidu and Kudzanai Nyaksaka but they too failed to hit the back of the net.Rodreck Mutuma continued to struggled wasting chances much to the agitation of the Dynamos faithful and was eventually substituted. Praise Tonha almost clinched a late win but his shot just went off .

Dynamos remain in fourth after the draw with 27 points. 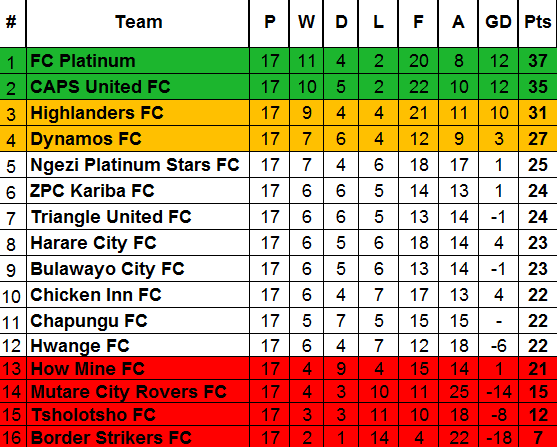