FC Platinum finally registered a league win at home when they edged How Mine 1-0 in a tightly contested match.

How Mine restricted FC Platinum with a well set up offside trap despite the home side dominating proceedings.

However Walter Musona finally broke the deadline with a well taken goal in the 29th minute when he lobbed the ball over the keeper before heading in.

Despite the goal How Mine refused to give up and almost scored through Toto Banda early in the second half.

FC Platinum continued to press but were wasteful in front of goal as the half progressed with Musona,Elvis Moyo and Kawashu all guilty.

There was drama and a tight finish in added time when How Mine pressed for an equaliser with Kuda Musharai and Toto Banda all coming very close but FC Platinum held onto to record a key win.

In other matches Ngezi Platinum needed a first half penalty to beat 1-0 Bulawayo City while Tsholotsho gave their hopes of survival a big boost with a 1-0 win over Border Strikers. 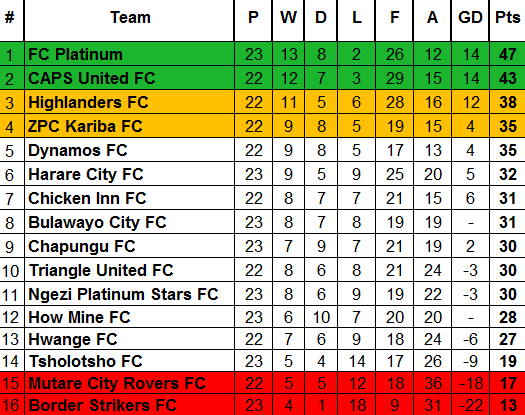