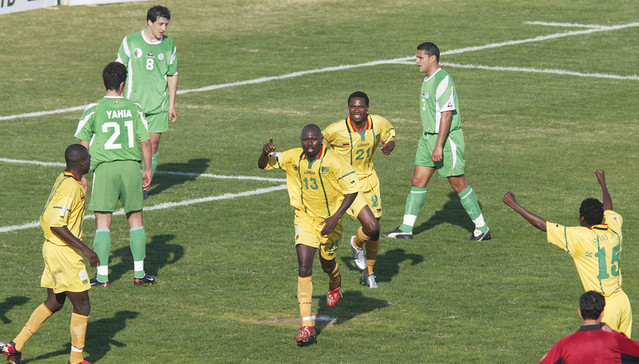 Zimbabwe meets Algeria for the second time in the prestigious Africa Cup of Nations tournament, after a match in which the former clinched an unlikely 2 – 1 victory in an AFCON group C match played in Sousse, Tunisia, in February 2004.

Zimbabwe play an AFCON group B opener against Algeria in Franceville, Gabon this weekend. Tunisia and Senegal are the two other group B contestants.

Against the famous 2004 2-1 backdrop of victory, Zimbabwe will likely look to a diminutive inspiring historical fact for hope, to give impetus to a large imminent impossible continental dream, against a likely vengeful somewhat rehabilitated Algerian side.

That the two teams have since met twice – in two indeterminate legs of the Germany 2006 World Cup qualifiers – recording 1-1 and 2-2 stalemates respectively, for the Warriors, adds belief to statistic, a well-heeled turf to an ultimately level playing field.

Algeria ultimately won the 1990 Africa Cup of Nations, after beating Nigeria 1-0 to the final whistle, and will also likely parenthetically wander into that distant historical episode to decipher imminent probable meanings of the ambivalent job at hand.

With recent international friendly results acknowledged; Algeria 6 – 0 Mauritania, Zimbabwe 1 – 1 Cameroon, the warriors of Zimbabwe are in danger of suffering from an acute inadequacies of key confidence.

In vantage, overhauled Algeria comes across as a bragging middle aged Harrod of cosmopolitan appeal; with a Poinciana regia grip on international records at convenient intervals, having partaken in world-wide football bliss at the highest level – including reaching AFCON 2015 quarter finals and cheekily being the first team to have scored four goals at FIFA World Cup Brazil 2014.

Zimbabwe, on the other hand, are more endemic.

Having only Southern African regional COSAFA Cups as major achievements in Africa, the Algerian ecumenical appeal will look to harmfully inspire the warriors of Zimbabwe to works of clinical aggression.

Nevertheless; the warriors will cantankerously hang on to 2004, while Les Fennecs will cling onto 1990. Both hogs hobbling against the game’s howlers; hoppling and hoping against common hope that history will not repeat itself (no pun intended).

Of the final 23 men squad they carried to Gabon, Zimbabwe is yet to lose any players to injuries. In their underdog status, they will look to build on the brassy, meretricious promises of a however indeterminate stalemate with Cameroon a few days ago.

Algeria will be without key midfielder Saphir Taider, who suffered a knee injury in training in Gabon. The French born Bologna midfielder will now be replaced by Arsenal midfielder, Ismail Bennacer. What it means for Algeria is that they have lost a key member of a largely revamped squad; arguably their most influential midfielder with international exposure. Taider played for France U-18, U-19, and U-20, before switching allegiance to Algeria in March 2013.

Algeria will also be without defender, Ramy Bensebaini, who plays for Stade Rennais in France, who is out with a niggling knee injury. The 21 year old, though lacking vast international experience – earning his first international cap playing for Les Fennecs in the U-23 AFCON match against Sierra Leon in 2015, leading to his first ever senior team call up during the FIFA 2018 World Cup qualifiers – is also likely a key omission given his versatility and foreign exposure.

Algeria will also miss the services of erstwhile captain, Madjid Bougherra, the former Rangers and Sheffield Wednesday versatile defender who retired in 2016. Where the Warriors are concerned, his absence will be a boost. The 34 year old made his full international debut in a FIFA World Cup 2006 qualifier on 20 June 2004 against Zimbabwe.

Meanwhile, Zimbabwe coach, Calisto Pasuwa – who has taken the team to AFCON for the third time in the history of the tournament, after Sunday Chidzambwa in 2004, and Charles Mhlauri in 2006 – maintained a good run of confidence, stating his goal of reaching the quarter finals.

“Our aim now is to qualify for the quarter-finals and we will take it from there”, he said in Harare, Zimbabwean capital recently.

Les Fennecs coach, Belgian Georges Leekens, who took over the Algerian job in October last year, said his team’s intensions are to win the tournament.

“We want to win this tournament and take part in the Confederations Cup, but all I’m thinking about right now is negotiating our first match well against Zimbabwe and then the second against Tunisia.

“As far as I’m concerned, these are our two biggest games at the start of this year,” he told FIFA.com.