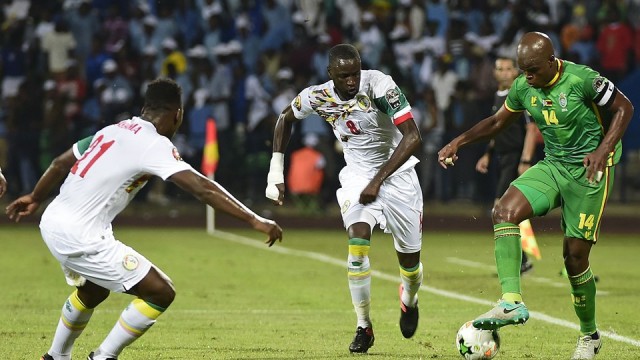 That the Warriors of Zimbabwe were visibly flying – high flying, several thousands of feet above ‘zeal’ level – after almost knocking Algeria 2-1 in the group B opener is by mutual consciousness. Incidentally, the second group B match saw the Lions of Teranga apprehend the Warriors of Zimbabwe 2-0 for the second time in an AFCON tournament. More than 10 years later, the Warriors still succumbed to chaotic ‘saturation bombing’ which saw the mighty Senegal almost score seven goals in 20 minutes. The Warriors were ‘running out of the oxygen’. It was torrid. AH?! How the ‘promise’ had become a dire moment for the Warriors on a dire equatorial evening!

Towards the end, the Senegalese had other late rounds of shots on goal which saw the Warriors almost concede another ‘several’ goals; but to the latter’s utter misfortunes was Tatenda Mukuruva! How the Dynamos number-one became the THE unlikely protagonist!

In their group B opener, Senegal similarly scored two goals in an unbelievable opening 30 minute blitz which saw Tunisia capsizing into eternal mayhem. The sheer density of the Senegalese – the movement; the suffocation; the ambush. Their opening moments tactical fiasco constitutes an almost insurmountable game plan.

This is probably also part of how they intended to avoid a burn out amid extreme humid conditions in Gabon.

Direly sweating in only a few moments, Calisto Pasuwa’s warriors – used to the coziness of southern African optimum weather conditions – probably did not have a real strategy on handling the vagaries of the equatorial climate.

Indeed, there appeared to be a problem of the weather immediately as Pasuwa’s flight took off, with tactical aerodynamics proving insufficient against the brutal winds of fate.

On Sunday, Algeria’s blindness to Senegal’s initial shenanigans and survival strategy will likely be key to the survival of the Warriors if they indeed beat Tunisia. If Algeria beat Senegal (if), and the Warriors beat Tunisia (why not?), then qualification will be down to score-lines.

‘The Lion and the fella’ (the metaphor)

Metaphorically, nature never loses against itself. In the Senegal, ‘Teranga’ is a special word which means hospitality, yet hospitality is not a quality of lions. Yet Teranga has more profound meanings; it’s a way of life, an integral part of the national character and a matter of pride. Senegal, ranked the best in Africa by FIFA, is in essence, ‘king of the jungle’, and the warriors can perhaps be forgiven for the result. In all its arrogance and egotism, which are an integral part of every pride of lions, it would have been unheard of, had the fella eaten the lion.

George of the jungle | Calisto Pauwa’s warriors struggled to figure their way out of the lions’ den at the Stade de Franceville as Zimbabwe 2017 AFCON hopes hang in the balance.

He stretched! The rest of the team was stretchered! He was the one man who went all out – in the very essence of protagonism – to avoid an epitomical embarrassment.

Probably with the painfully decisive Riyad Mahrez’s late equaliser four days ago still in his mind, Mukuruva had set himself for reprisal. He refused a rout! ‘Never!’, he appeared to swear. The short goalkeeper jumped and lingered in the tall heights of the Senegalese marauding forwards; he sweated. He came off the line; he blocked; he cleared; salt-faced, and he would limp back to the line. What corrective madness!

Hard tackling warriors captain, the Kaizer Chiefs’ midfielder Willard Katsande – burdened by the acrimonious man marking duty of taming these tenacious lions – and his midfield general, Marvelous Nakamba, fresh from suspension, failed to complement each other to their detriment. That Pasuwa’s style, by his own standards, typically revolves around hard tackling defensive midfielders (Alimenda archetype) and specialist ball passers (Devon Chafa classic), makes a jot of sense that after Algeria, he had decided to bench Danny Phiri, whose fundamentals would replicate Katsande.

But that Nakamba is no ‘Devon Chafa’ smacks of a reverse gesticulation that could easily have been rectified by having all of Katsande, Nakamba and Phiri in midfield, minus a slow Matthew Rusike.
Katsande (kepizha) had now lost touch with his midfield compatriots and lost the ball in the 8th minute in his own half – and two passes later, it was a Sadio Mane goal. Rusike was fish fried! And the ball rib-tickingly passed ahead of him to Keita, who either crossed or had a shot, to Sadio Mane’s amusement. Nakamba, and Rusike (the anti-type), mostly slowed down the tempo. Yet Pasuwa could have replaced Rusike with Nakamba in the hole, with Danny Phiri taking Nakamba’s initial role to fortify the midfield.

That said, the initial 20 minute blitzkrieg was made a success; a result of unbelievable midfield disarray which constantly left the defenders exposed. And dreams were shattered. After the madness, proverbially, the warriors prodigally found it sane to return ‘home’. They enjoyed more ball possession (51%) late in the 1st half and beginning of the second half, with the substitution of Matthew Rusike and Kuda Mahachi (who struggled to find open spaces).

‘Disorder!’, cried Pasuwa from the line. The momentary blitzkrieg had apparently come in cyclonic proportions. Emotions soured. Full back, Hardlife (‘Hardy’) Zvirezwi , sometimes stood out, as the score line irrevocably went up in minutes. Up and down he persevered, overlapping.

They had their inconsistencies; their discrepancies. Nevertheless, after the defenders recovered, the likes of Costa Nhamoinesu looked formidable again. Onisimo Bhasera became notify-able again, as Pasuwa hurled instructions from the line. Elisha Muroiwa’s game reading capacity – which was thrown into question in various moments throughout the game – became clear again, albeit for a while.

Overall, Senegalese surged in assured maneuvres as the warriors appeared to periodically lapse in concentration.
2-0! Such was the indolence of the players and indecisiveness of the pilot, Calisto Pasuwa, and oh, yes– Malajila did come on, with a subsequent horror back pass which epitomized disaster as the Warriors of Zimbabwe’s AFCON 17 hopes looked to be crash-landing. Somewhere in the Bermuda triangle.

What’s Khama Billiart up to?