Mourinho Blasts BBC Journalist, Tells Him Not To Have A Microphone In His Hands 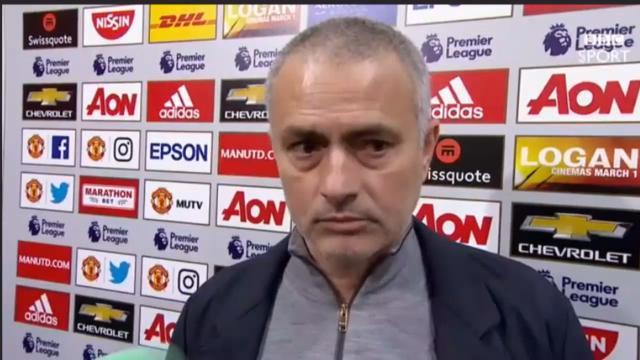 Manchester United manager, Jose Mourinho, walked out of a post-match interview after ranting on BBC journalist, Martin Fisher, for questions pertaining to Mourinho’s earlier remarks on the referee, Mike Jones, in the wake of their 0-0 draw against Hull City yesterday.

United hosted Hull at Old Trafford and recorded the disappointing stalemate as the title race charges up. Fisher quizzed Mourinho about his conceptions of the referee during the match.

“If you don’t know football you shouldn’t be with a microphone in your hands,” Mourinho replied, before storming out of the interview.

Earlier, Fisher had asked Mourinho about his general sentiments on the draw.

“We didn’t score. If you don’t score, it’s impossible to win,” he said.

A clinically indifferent Mourinho appeared to be largely sarcastic about his opinions of the game.

“I think Hull City; they tried to see where they could go, the way they could behave. They tried to see what the referee could allow them to do [and] they had a feedback, they were comfortable to do what they did and I’m not critical of that because they are in the position they are. They are fighting relegation, and every point for them is gold and I’m not critical of them,” he said.

Elsewhere, Mourinho took a subtle swipe at the FA for ‘different treatment’ and ‘different rules’ applying exclusively to him. Mourinho alluded to Liverpool manager Jurgen Klopp’s exchange with fourth official Neil Swarbrick during their 1-1 draw with Chelsea on Tuesday.

“Yesterday a fourth official told a manager: ‘I enjoy very much your passion.’ Today, I am told to sit down or I am going to be sent to the stand,” he complained.

Jurgen Klopp later apologized after shouting in Swarbrick’s face during the second half of Tuesday’s match at Anfield, and said the official told him: “No problem, I like your passion.”

“You know clearly I am different. The rules for me are different,” Mourinho said.