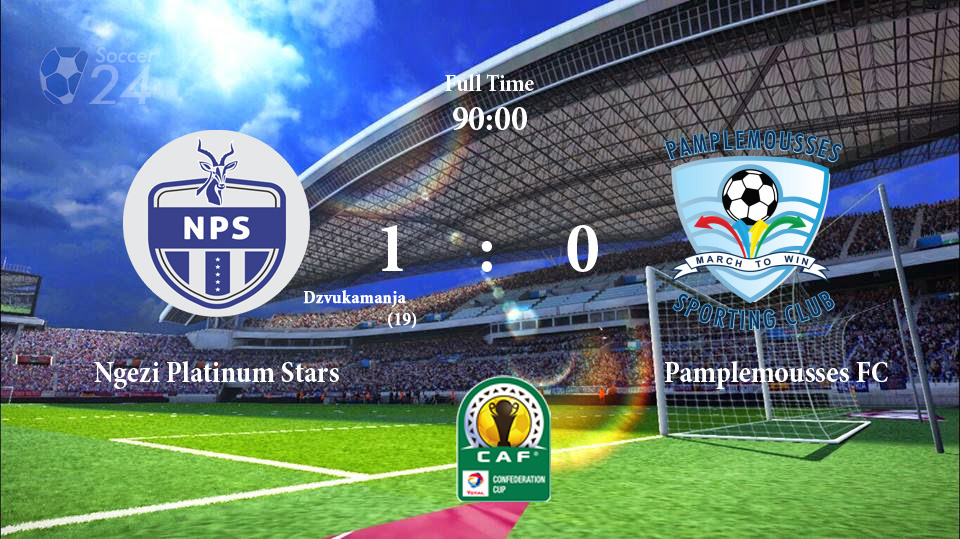 Ngezi Platinum Stars progressed to the next round of CAF confederations Cup after edging Mauritius side Pamplemousses 1-0, despite a host of missed chances which could have made the hosts more handsome winners.

Forward, Terrence Dzukamanja, scored the only goal of the game with a sublime shot in the top corner after a superb cross from Godknows Murwira on the right.

The opening quarter of an hour was a cage affair with neither side really dominating possession, despite the home team creating the better chances.

Ngezi could have easily doubled the lead immediately after the goal but chances went begging with goal scorer Dzukamanja shooting wide from three yards out in the 23rd minute.

There was controversy six minutes later, after referee, Ishamael Chizingi from Malawi, ignored appeals for what appeared to be a genuine penalty as Ngezi Platinum Stars forward, Donald Teguru, was brought down in the area.

The visitors had two real chances at goal in the first half when Kengy Saramantif missed a free header from inside the area on 36 minutes and when Kevin Perticots hit a curling free kick from 14 yards, with Ngezi goalkeeper, Nelson Chadya equal to the task just before the break.

Half time came with Ngezi Platinum Stars having the upper hand both in possession and in attack. They mostly played in their opponents half and posed a huge goal threat as Pamplemousses’ defence looked shaky.

After the break, the match took a balanced turn in possession, albeit with Ngezi Platinum Stars on a rampage of attacks. However, Pamplemousses could have equalized 25 minutes after the interval but forward, Branly Zizi, shot over the bar from inside the area as the visitors launched a rare attack.

The hosts were increasingly wasteful in the second half with several squandered open chances which will likely highlight the focal area of attention for coach, Tonderai Ndiraya, ahead of their second round first leg match.