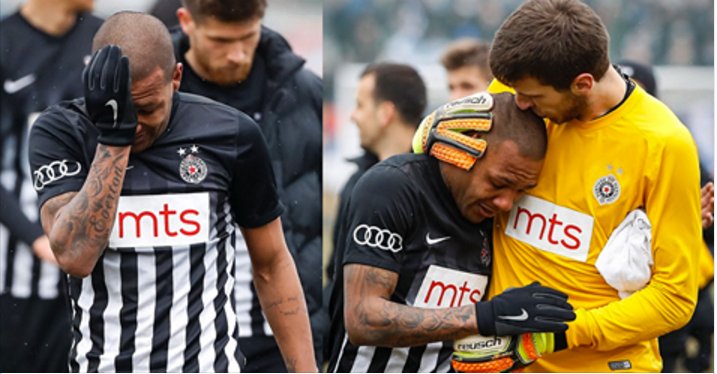 Even with UEFA’s best attempts to “Say No to Racism,” bigotry and European soccer fandom unfortunately still go hand in hand.

In Sunday’s Belgrade derby, the Brazilian Partizan Belgrade midfielder Everton Luiz left the pitch in tears after being subjected to shocking racist abuse from the stands. Rad Belgrade supporters unveiled a banner insulting Brazilian star Luiz before the end of the match. The referee halted the game while the banner was removed, while public messages were released by stewards to try and get the Rad fans to stop their chanting but the pleas were ignored.

At the final whistle, Luiz made a one-fingered gesture in the direction of the Rad fans, who had to be restrained by the police. Following the match, Luiz said: “I’ve been suffering racist abuse during the entire 90 minutes and also was upset by the home players, who supported that. They were all attacking me. I want to forget this as soon as possible. I love Serbia and the people here, that is why I cried. But please say NO to racism!”

Luiz’s manager, Marko Nikolic, called for Serbia’s football authorities to discipline Rad’s supporters. Although he understands Everton’s reaction, he did not condone his player’s reaction to the abuse. He said: “Everton should not have reacted but something provoked his outburst, didn’t it? Both sides in the incident should be punished. These things happen in football but it is now up to the authorities to sanction the offenders. It’s a return to the reality of Serbian football.”