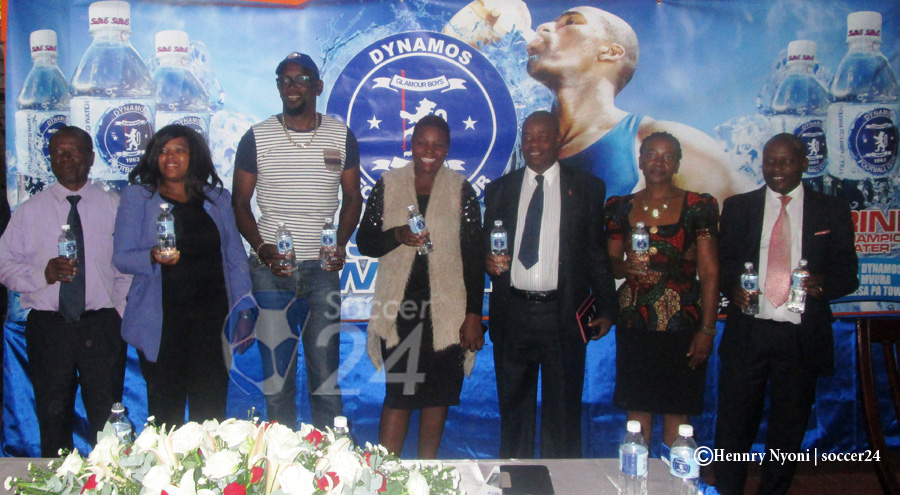 Dynamos, in partnership with Afhold Investments and Consultancy have launched branded mineral water.

In a statement read at K.M Auctions in Harare, Afhold Investments and Consultancy Marketing Director, T. Madhara said the partnership has been fuelled by the desire to see local football moving forward.

“Fuelled by the desire and passion to see soccer move forward, we at Afhold investments and Consultancy have come up with this valuable project where Dynamos are set to benefit immensely. You will agree with me that Dynamos is the heartbeat of Zimbabwean soccer and when they catch a cold the whole football fraternity catches a cold said Madhara

Madhara also lamented the shortage of commercial opportunities in football, saying that soccer as a business was struggling to make ends meet due to complex issues to do with the business management side.

“Soccer is the most popular sport in the country. However, despite its popularity clubs are still finding it hard to make ends meet. This has partly been as a result of us the business community and the clubs failing to unlock the commercial opportunities within the sport. Piracy of team merchandise has also taken its toll on clubs and they have failed to enjoy economic benefits that could be derived from their brands,” the statement further reads.

Dynamos rivals, CAPS United, have had a similar partnership with a company called Design Mineral Water, an agreement which was terminated halfway through due to low sales and hefty losses in printing fees by the club.

According to a statement from the company:

“The greatest clubs in the world have realised this potential and are exploiting their brands through franchises like this to generate revenues for their clubs. Real Madrid for instance racked in 247 million Euros in 2016 from marketing their brand. The Dynamos deal has potential to rack in up to hundreds of thousands of dollars a year if we all play our part. It is against this background that Afhold and Dynamos FC came up with this initiative which we hope will see us do greater things.”

Afhold Investments and Consultancy assured their consumers that the product is of an approved quality from a Standard Association of Zimbabwe (SAZ) registered supplier.