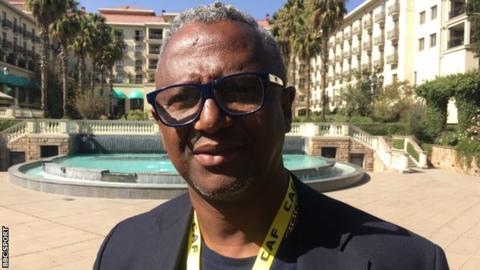 The outspoken Guinea Bissau FA boss, Opes Manuel Nascimento appears to be the most dejected man following the ouster of incumbent CAF President Issa Hayatou claiming the African game has been sold to the Europeans.

Nascimento a strong admirer of Issa Hayatou had earlier indicated that he will quit football if the man who has been at the helm of CAF for the past 29 years was to be displaced.

Just over the weekend, Madagadcar man Ahmad beat Hayatou 34-20 in the CAF elections and Nascimento could not hide his dissapointment.

“It is unfortunate that my candidate had lost the elections. It is annoying that a FIFA president influenced this election for his own interest,” said Nascimento.

Last month during the Africa Cup of Nations in Gabon the Guinea Bissua FA President blasted the FIFA boss Gianni Infantino claiming that he was forcing Africans to make a decision on their own African football.
Nascimento said this is one of his worst days because African Football has been sold to the Europeans now.

“We cannot dance to the tunes of Infantino. I will contemplate if to remain in football or quit,” said the disappointed official.