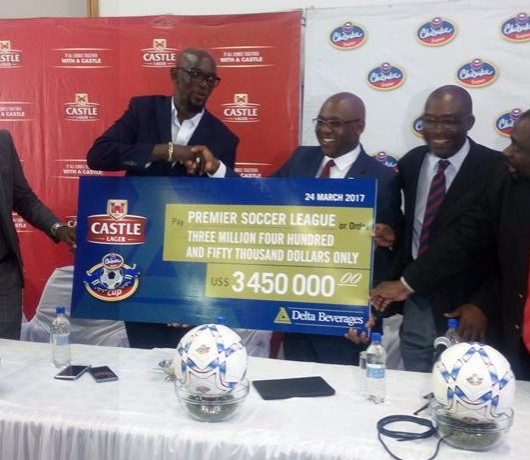 Delta Beverages has announced a new sponsorship package for the Zimbabwe Premier Soccer League. Under the new deal Delta will sponsor the league to the tune of USD $5 450 000 million for the next three seasons.

$700 000 will be unveiled for each Premier Soccer League season.

PSL acting chairman, Kenny Mubaiwa, thanked and paid tribute to Delta Beverages for their renewal of the sponsorship as well as continued investment in football.

“Our partnership with Delta Beverages through their Castle Lager brand will enable us to continue to develop the sport and achieve our mandate of making football ‘More Than Just A Game’,” said Mubaiwa.

“During our partnership with Delta, we have seen super fans enjoying right from the start to the end of the season.

In addition a new cup , the Castle Challenge Cup has been launched. The Castle Challenge Cup will be contested between winners of the Chibuku Super Cup and the Premier League winners. The match which will be played on the last weekend of the football season and will see the winners get $50 000 and the runners getting $20 000.