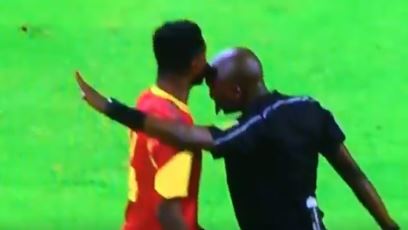 Botswana official Joshua Bondo, privided a rather unusual highlight to a seemingly actionless match when he took charge of Tuesday night’s friendly between South Africa and Angola.

The match ended in a goalless draw but Bondo provided the biggest highlight with his brief confrontation with Angola’s Masuekama Natael.
After awarding a free-kick to South Africa, Bondo appeared to push his head towards the Angolan defender, who went crashing to the turf clutching his face.

The player returned to his feet and played out the remainder of the match as his side held out for a goalless draw against Owen da Gama’s side.

Bondo who is nicknamed ‘sprinter’ due to his high energy levels on the pitch showed a rather unusual side of himself.