Bantu Bantu Rovers suffered their second consecutive defeat as they went down 3-2 to FC Platinum at Maglas Stadium this afternoon.

FC Platinum took an early lead with Charles Sibanda scoring the the opener in the 4th minute before Rodwell Chinyengetere added a second in the 18th minute.

However Bantu Rovers managed to keep themselves in the game when Sianchali pulled one back with a spectacular volley to beat Petros Mhari in goal for FC Platinum.

The halftime break came with the home side still leading but missing several chances to add more goals with Marshall Mudehwe in particular wasteful in front.

In the 66th minute Rodwell Chinyengetere made it three for FC Platinum converting from a penalty after a Bantu Rovers player had handled the box.

Four minute later Bukhosi Sibanda converted a penalty for Bantu Rovers after a Petros Mhari’s foul in the box. The goal ensured an exciting finale but Norman Mapeza’s side held on to claim the points and go top of the table.

At Barbourfields Stadium Bulawayo City edged Rahman Gumbo’s Chicken 2-1 . Mkohkeli Dube put Bulawayo City ahead in the 29th minute but Thomas Kudyaridzwe came off the bench to equalise for the Gamecocks in the 76th minute.

However Kevin Madzongwe had the final says as he restored the lead three minutes later to hand Bulawayo City the win.

At Luveve Stadium Tsholosho and How Mine shared the spoils drawing 1-1 while Black Rhinos edged Chapungu 1-0 at the National Sports Stadium. 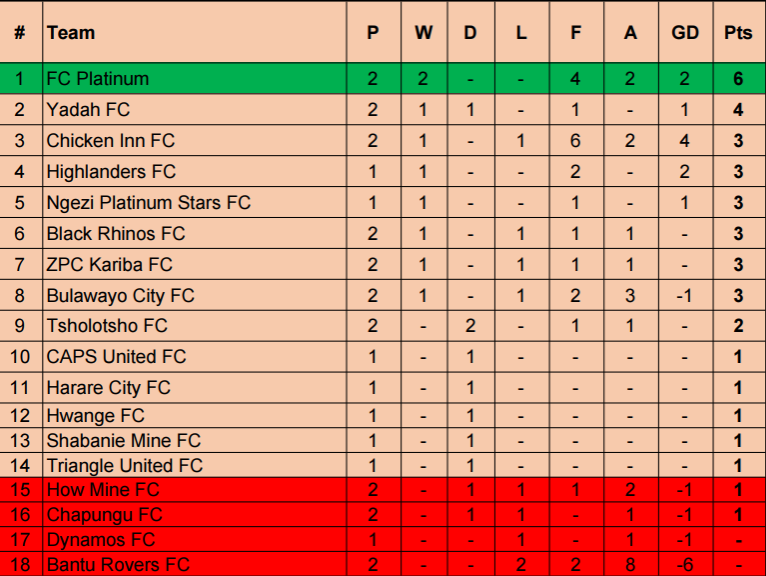