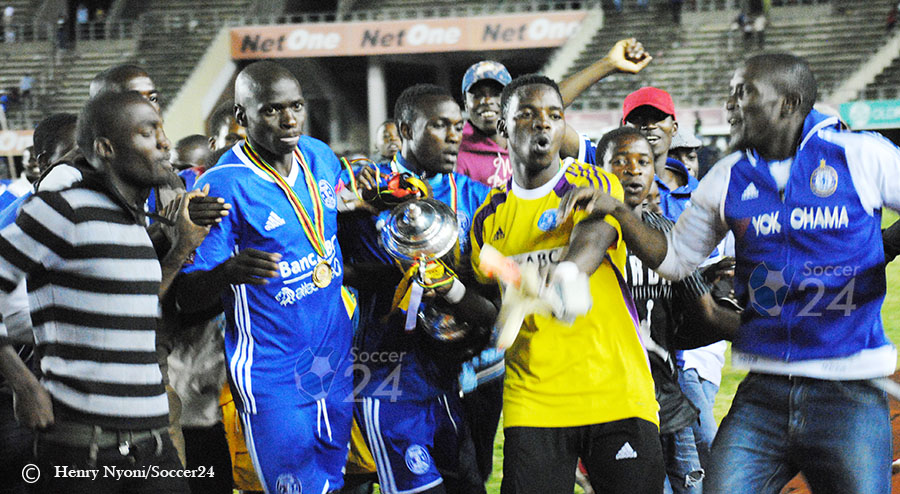 Dynamos forward, Masimba Mambare, became hero and villain in their Uhuru Cup win over his former club Highlanders after scoring and then missing a penalty in the shootout stage of the final played at the National Sports Stadium on Sunday.

Mambare became hero, notching home for Dynamos in the 57th minute, a few minutes after coming on as substitute. Ralph Matema equalised for Highlanders from the penalty spot seven minutes into second half extra time to make it 1-1 forcing the match into a penalty shootout.

“I think it happens in football. It doesn’t feel good to miss a penalty especially at such an occasion. Everyone was looking forward to me scoring but it was very unfortunate I missed. But I thank God he had other ways. And he made us win. I’m happy now,” he told Soccer24 after the match.

However, the Dynamos forward, who has had rough moments being side-lined with injuries since joining the former premier league champions in 2013, expressed profound joy in scoring an important goal for his side against his former pay masters and thanked the coaches for the opportunity to go out and display what he can do.

“I give credit to God and my teammates as well and to the coaches as well who had faith in me. I wasn’t playing well. I think wasn’t getting much game time. But I think it’s coming up now (game time), coming on as a substitute and scoring. I think it’s a dream come true, playing at a big stage like this,” he said.

Mambare said their Uhuru Cup triumph – which also saw them beat premier league champions CAPS United in the semi-final – is a sign of new fortunes for the Harare club. He urged Dynamos fans to be patient during the rebuilding phase which has seen some of their performances going down. He also praised some of their recent signings as real class in the quest to regain their glory.

“We have recruited new players, the likes of [Emmanuel] Mandiranga, the Cameroonian [Christian Ntouba], we have Quality [Kangadze]; for real he’s real quality and he’s proving to be of value to Dynamos football club. And I think as a senior player at this team, I think we are getting somewhere. Given time and opportunity, I think we can do better next time,” he said.