Round Up: Dynamos and Highlanders win, CAPS United held by Tsholotsho

Dynamos registered their first win of the season this afternoon while there were also victories for Highlanders, Chicken Inn while CAPS United were held.

At Barbourfields Stadium Highlanders and ZPC Kariba played out a five goal thriller with Bosso winning 3-2.

Talent Chamboko put ZPC Kariba ahead with a well taken volley in the 18th minute. However Highlanders bounced back at start of the second half with Allen Gahadzikwa scoring with a header to equalise before Prince Dube scored the second two minutes later.

At the Colliery Stadium Hwange had the upper hand for most of the game but  it was Dynamos that walked away with maximum points with Emmanuel Mandiranga getting a dramatic winner in stoppage time.

At the National Sports Stadium Tsholotsho held their own to draw with defending champions CAPS United. Nkosana Siwela gave Tsholotsho a surprise lead against the run of play in the 38th minute.

CAPS United pressed to get themselves back in the game and finally managed to equalise in the 63rd minute through Ronald Pfumbidzai. CAPS United continued to search for the winner but were wasteful as Tsholotsho held on to clinch a point.

At Gibbo Darry Nyandoro’s late goal was enough to give Chicken Inn a 1-0 win over Triangle while Shabanie and Harare City played out a goalless draw at Maglas. 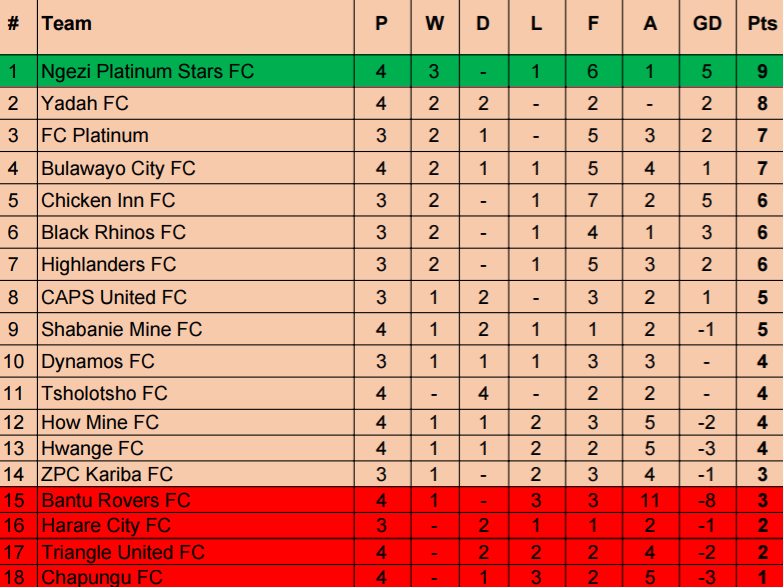