Highlanders, ZPC Kariba and Hwange registered wins while Ngezi Platinum came back from two goals down to draw 2-2 as the Castle Lager Premiership entered Week 5

After a goalless first half at Dulivhadzimu Prince Dube gave Highlanders the lead four minutes after the break before Rodreck Mutuma doubled the lead with his first league goal for Highlanders. Although Tsholotsho pulled one back through Lucky Nyathi to ensure a tense finish Highlanders claimed all the points.

At Baobab Stadium CAPS United let a two goal lead slip to draw with Ngezi Platinum. The defending champions took the lead in the 49th minute through Tafadzwa Rusike. Rusike then turned provider to set up Amidu for the second.

Chitembwe’s side looked to have sealed all the points but Tonderai Ndiraya’s key substitutions saw the home side pull one back through Donald Teguru. Ngezi Platinum continued to press CAPS and were eventually rewarded when Bulaji struck the equaliser with a header in added time to secure a draw. The goal did not go down well with CAPS United players who felt the ball had not crossed the line.

Yadah continued with their good start to the season when they secured a draw against Chapungu at Ascot Stadium. Allen Tavariswa score for Chapunga but Leeroy Mavhunga equalised for Yadah in the 77th minute from a penalty.

At Maglas Stadium Norman Mapeza’s FC Platinum were frustrated by Triangle and played out a goalless draw. ZPC Kariba took an early 2-0 lead at Nyamhunga and ended up victorious securing a 2-1 result against Shabanie.

At Luveve Stadium Bantu Rovers and Hwange played out a five goal thriller with the visitors securing a late 3-2 win.

The ‘Battle of the Cities’ between Harare City and Bulawayo City ended in a goalless draw. 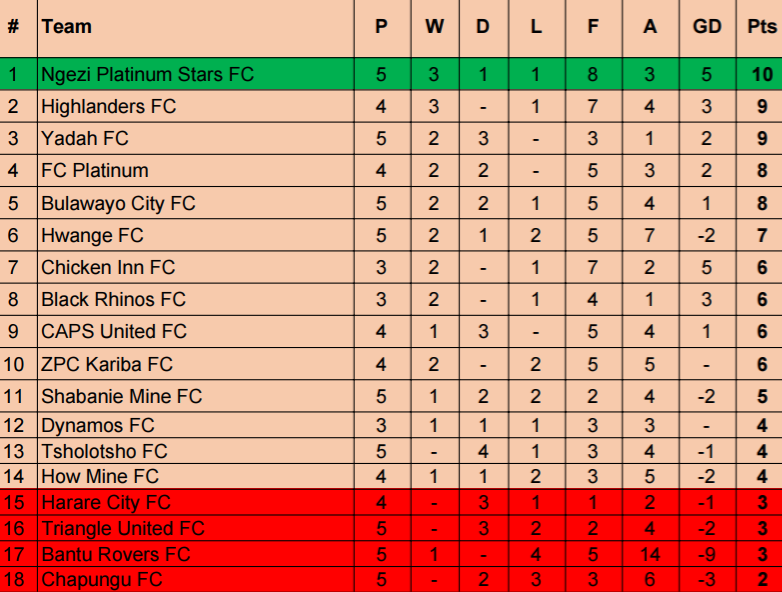 72’GOAL Teguru pulls one back for the home side

65’GOAL Lucky Nyathi pulls one back for Tsholothso

77′ Mavhunga scores from a penalty

69’GOAL Bukosi equalises for Hwange to make it 2-2

44’ GOAL Hwange equalise from a penalty