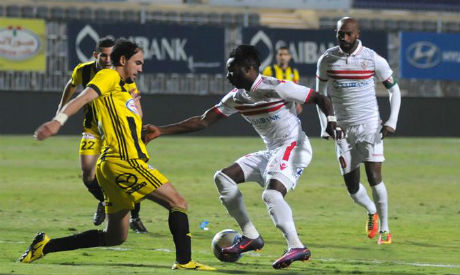 Zamalek returned to winning ways with a 2-1 victory over Arab Contractors in the Egyptian Premier League on Sunday, finally finding the net after two straight goalless draws.

But they looked slightly better against Contractors, taking the lead through a dubious first-half penalty converted by Ahmed Refaat after a defender was adjudged to have felled Nigerian forward Stanley Ohawuchi in an aerial challenge; although television replays showed there was only a minimal contact.

Mohamed Farouk leveled the score after a breakaway on 73 minutes but Stanley soon restored Zamalek’s advantage with his third league goal since joining on loan from Wadi Degla last summer.

Zamalek remain third with 51 points, seven clear of fourth-placed Masry who have two games in hand. Both sides are vying for a place in the Confederation Cup, Africa’s secondary club competition.

Inacio opted to leave out some regulars, including main striker Bassem Morsi and veteran winger Shikabala, to rest them ahead of Friday’s opening group-stage match of the African Champions League against Zimbabwean Champions CAPS United.