In the Castle Lager Premiership this afternoon ZPC Kariba, Chicken Inn and Black Rhinos registered wins while FC Platinum and How Mine played out a goalless draw.

At the National Sports Stadium Yadah suffered a tsecond consecutive defeat of the season when they lost 1-0 to Chicken Inn.

Yadah displayed a better performance after the 7-2 thrashing to Bantu Rovers but still succumbed to a late Kudakwashe Gurure goal in added time.

At Nyamhunga Stadium, ZPC Kariba beat Tsholotsho 2-0.  Samuel Makawa gave ZPC Kariba the lead with his first goal of the season in the 34th minute.

Raphael Manuvire then doubled the lead in the 88th minute to secure another set of three points. The result sees ZPC Kariba go top of the log standings ahead of other Week 8 matches.

At Barbourfileds Stadium Black Rhinos continued with their good start to the season when they edged Bulawayo City 1-0. Rhinos keeper Herbert Rusawo got the all-important goal from the penalty spot after Morris Kadzola had committed a foul in the box.

FC Platinum played out a goalless draw with How Mine in an early kick off. Both  teams had good chances but failed to take them for most of the chance. Rodwell Chinyengetere had a great chance to put his side into the lead with a second-half penalty but his effort was saved by How Mine keeper Munyaradzi Diya. It was the fourth draw by FC Platinum this season. 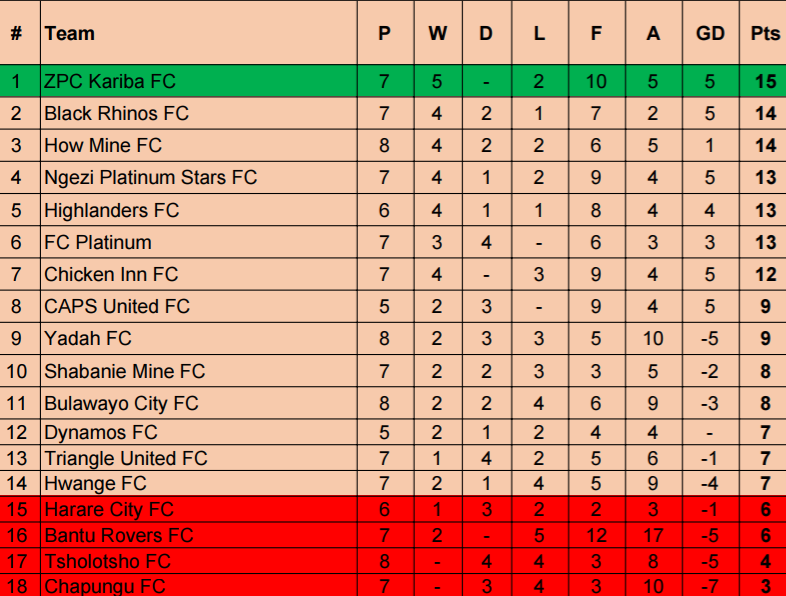