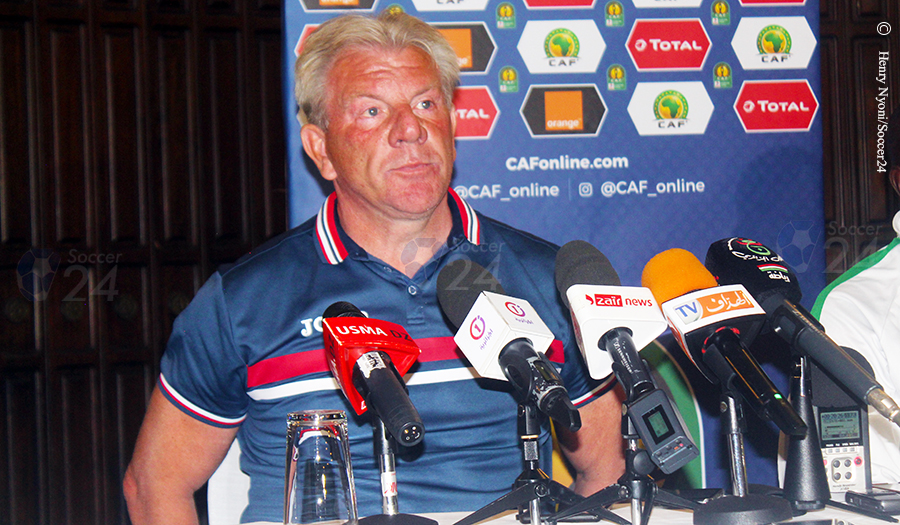 USM Alger coach, Paul Put, has said he expects a tough game when they clash against Zimbabwe premier league champions CAPS United in a CAF Champions League group stages match at the National Sports Stadium in Harare on Wednesday.

The two sides face off in the second group B fixture of the group stages with the Algerians having recorded a 3-0 win against Al Ahly of Tripoli. USM Alger are under pressure from a CAPS United side which lost 2-0 away in Zamalek in the first match and will be looking to turn around their fortunes in this home clash.

Addressing a press conference in Harare Tuesday afternoon, Put admitted to pressure and said it will be difficult for the North Africans to win against CAPS United in their backyard.

“. . . the game tomorrow. I think it’s a tough game. I think I have enough experience in Africa, if you play an away game, it’s always difficult so we have to be very concentrated for this game. I also appreciate a lot CAPS United because I have seen them playing, they have a very good team, [a] technically difficult team, with a lot of speed. So if you are playing an away game, you know you will play against the pressure. So there are a lot of things you have to keep in mind to face this game. So I will ask also my players to be concentrated during this game,” Put said.

Put said initial plans to travel earlier to Harare in order to afford players adequate rest did not materialize but said that their acclimatizing training schedule would go ahead as planned.

“. . . I told the people that I would [want to] come one day earlier for the [sake of] recuperation (rest) for this game . . . we didn’t have that solution, so we had to continue with this [arrangement]. We’ll prepare for this game like we have to.

“. . . we had a trip by night, in recuperation (resting) time, [so] we didn’t have that much time to have recuperations but we will [have] no excuses, we are going to face this game and try to do our level best,” he said.

Put emphasised that he was not taking CAPS United lightly and expected tough competition when they clash this afternoon.

“I appreciate a lot the team of CAPS United because it’s a very good team with a lot of quality.

“. . . I assured the boys that CAPS United are a good team. They have a technique of speed and they indeed have speed and it’s difficult to play against them but we’ll concentrate to bring honour to their country and their team,” he said.