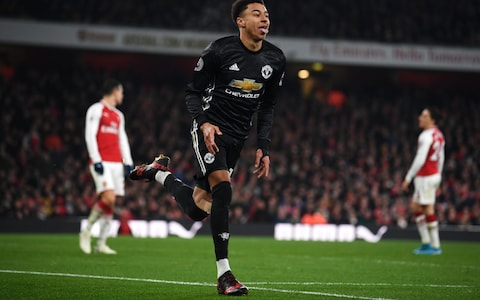 Antonio Valencia opened the scoring in the fourth minute after linking up with Paul Pogba. The Red Devils doubled their lead in the 11th minute through Lingard, who benefited from a fine Anthony Martial lay-off before converting in off a post.

Arsenal wasted numerous chances to cut the deficit, with most of their efforts denied  by goalkeeper David De Gea, who produced a terrific display.

Lacazette did pull a goal back for the Gunners just after half-time but Lingard restored United’s two-goal cushion after 63 minutes minutes of play.

Pogba was then sent off for a stamp on Hector Bellerin with 16 minutes remaining. He will miss next Sunday’s Manchester derby.

Emre Can powered a header home on the half-hour mark and two minutes later Roberto Firmino scored his first goal on the day to put the Reds 2-0 up.

Firmino added his second three minutes after half-time but Glenn Murray converted a penalty for Brighton moments later. The Reds added gloss to the scoreline in the closing stages courtesy of a fine Philippe Coutinho strike and a Lewis Dunk own goal.

Dwight Gayle earned a shock lead for the visitors before Hazard levelled for Chelsea. Alvaro Morata headed home to put the Blues in the lead for the first time before Hazard completed his brace in the second half after converting from the spot with a Panenka penalty.

Watford 1-1 Tottenham
Tottenham’s winless run in the league was extended to four games after they were held to a 1-1 draw by Watford.

Christian Kabasele opened the scoring for the hosts after 13 minutes before Son Heung-min converted Christian Eriksen’s cross from close range to equalise. Spurs finished the game with ten men after defender Davinson Sanchez was sent off in the 52nd minute.