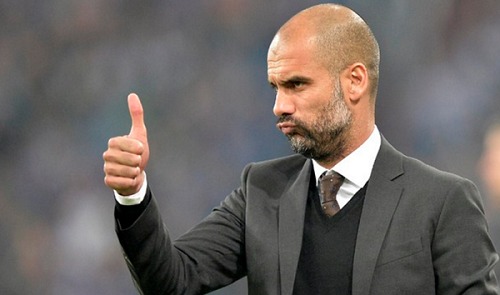 Pep Guardiola says he wishes Manchester City could face Paul Pogba when the Premier League leaders bid to re-write the history books in their huge derby with Manchester United.

Guardiola watched his side equal a Premier League record by winning their 13th straight match on Sunday when David Silva’s late volley snatched a 2-1 win for City over West Ham on Sunday.

They can break that record – set by Arsenal in 2001-02 and equalled by Chelsea last season – and deal their local rivals a huge title blow when they visit Old Trafford next weekend.

Pogba fanned the derby flames in a weekend interview in which he quipped that he hoped City suffer injuries this season only to then rule himself out of Sunday’s game by being sent off for a stamp on Hector Bellerin in United’s 3-1 win at Arsenal on Saturday.

“He said that?” said Guardiola when asked about Pogba’s comments.

“Hopefully we have no injuries and I wish that Paul could play against us. I like to face a team with their best players possible to see who we are able to beat.

“In the end I think it was just an expression. I’m pretty sure he didn’t want our players to get injuries.”

City have now earned nine league points this season by scoring in the last eight minutes of games, a sign not only of their persistence but also of how defensively teams are playing against them.

“They (West Ham) didn’t want to play, they had 10 players inside the box, they take 20 seconds to the goalkeeper and that has happened the last few games.

“Today I learned to attack a little bit differently, that is good news for me for the future. We don’t normally play with two strikers and two wingers but we did.” – AFP