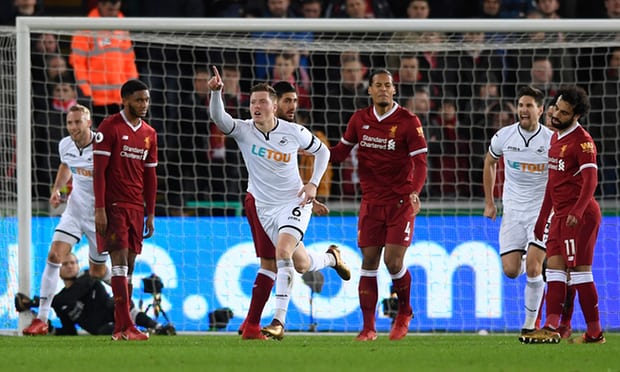 Liverpool’s 18-match unbeaten run in all competitions came to an end after they lost 1-0 to lowly Swansea on Wednesday night.

Alfie Mawson’s first-half goal from Sam Clucas’s corner handed the hosts victory and at the same time destroyed the belief that Liverpool’s set-piece woes would end with the arrival of Virgil van Dijk, who made his league debut last night.

Swansea began brightly, but it was Liverpool who dominated position and created three glorious chances in the first half.

The home team won a corner which was dealt with weakly by Van Dijk. Mawson took advantage of the loose ball and swept it low into the back of the net in the 42nd minute.

The visitors had several chances in the second half including Firmino’s header which was denied by the post in late stages of the game, but they failed to find an equaliser.

The match ended 1-0 in favour of City.

Swansea City remains bottom on the table with 20 points while Liverpool is in the 4th position with 47 points.