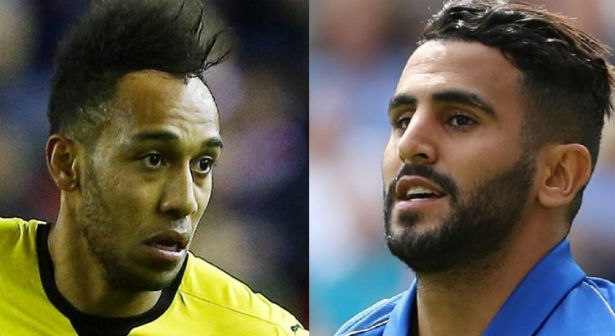 English Premier League
Pierre-Emerick Aubameyang has arrived at Arsenal’s training ground ahead of his expected £55m switch from Dortmund. The 28-year-old boarded a private jet from Germany to England earlier today.

Riyad Mahrez has handed in a transfer request at Leicester following a £50m bid from Manchester City. But according to Sky Sports the bid is well below Leicester’s valuation, and the Foxes will not sell at that price.

Chelsea have agreed an £18 million move for Arsenal forward Olivier Giroud, as the Gunners look to secure Pierre-Emerick Aubameyang from Borussia Dortmund for £55m.

Southampton have seen a £25 million offer for Quincy Promes rejected by Spartak Moscow, according to Sky Sports.

Chelsea are still hopeful of signing Edin Dzeko from Roma, but are lining up Olivier Giroud and Fernando Llorente as alternatives, reports Goal.

Jose Mourinho is eager to complete one more deal before the January deadline passes, according to The Transfer Window Podcast.

La Liga
Arsenal midfielder Marcus McGuane has agreed to join Barcelona for an undisclosed fee, the Gunners have announced.

Real Madrid president Florentino Perez is ready to offer Raphael Varane in part-exchange for Chelsea goalkeeper Thibaut Courtois, claims Don Balon. Paris Saint-Germain are also interested in Courtois, but Perez hopes including Varane in any deal will help Madrid to win the chase for the Belgium international.

Sevilla will turn their attentions to Everton striker Sandro Ramirez after failing to land Michy Batshuayi from Chelsea, Marca reports.

Karim Benzema has rejected two offers to leave Real Madrid, Don Balon reports. Florentino Perez is eager to shake up his squad, with the entire forward line marked for replacement as the president looks to get the Spanish capital side back in form.

Barcelona will enter a battle with Real Madrid for the signing of Inter defender Milan Skriniar, according to Don Balon.

Neymar’s proposed move to Real Madrid has been backed by Javier Tebas, with the Liga president eager to see the former Barcelona star back in Spain.

Bundesliga
Hamburg are ready to quadruple Jann-Fiete Arp’s salary in an attempt to persuade the teenage striker to sign a new contract, according to Sport Bild. Chelsea and Tottenham are among the clubs to have shown an interest in the 18-year-old, who now needs to make a decision on his future.

France
Bordeaux are weighing up a move for former Arsenal striker Niklas Bendtner, L’Equipe reports. The 30-year-old Denmark international has been in impressive goalscoring form for Rosenborg.

Arsenal and Liverpool have been dealt a blow in their pursuit of Monaco midfielder Thomas Lemar. Both Premier League clubs remain keen on the France international, but despite him missing Monaco’s last two matches with a mystery injury, the Ligue 1 champions insist he is not for sale during the January window.