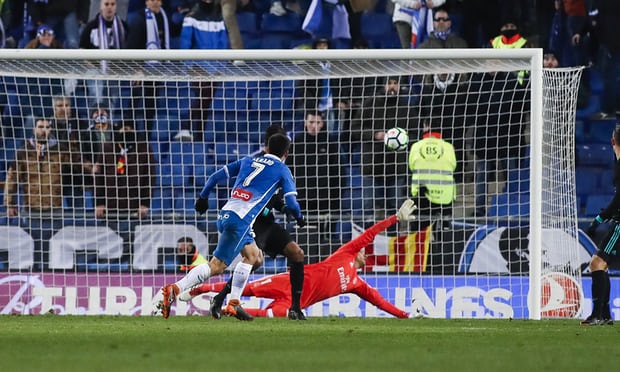 Real Madrid suffered a fifth La Liga defeat of the season as Espanyol’s Gerard Moreno struck late for a 1-0 win over the Spanish and European champions on Tuesday night.

Moreno wasted a number of chances but his last-minute volley took a wicked deflection off the defender Raphaël Varane to secure Espanyol’s first victory over Real in 11 years.

Real stay third on 51 points from 26 games, seven behind second-placed Atlético Madrid, who host Leganés on Wednesday, and 14 adrift of Barcelona, who play on Thursday. Espanyol moved up to 13th with 31 points after their first win in eight games.

Cristiano Ronaldo was rested ahead of next week’s visit to Paris St-Germain in the Champions League last 16, which Madrid lead 3-1 from the first leg.