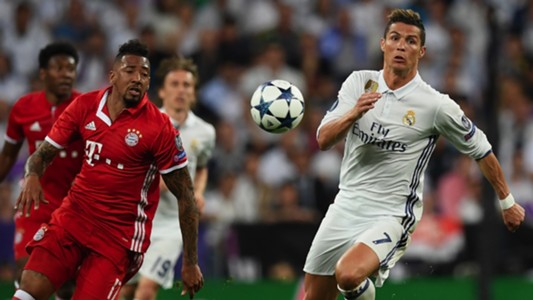 The pair both took part in training on Sunday in Munich, but reports suggest that winger Arjen Robben will not recover in time to play at the Santiago Bernabeu.

Alaba is fit again after missing Wednesday’s 2-1 first-leg defeat with a thigh injury, while defensive midfielder Martinez has recovered after coming off with a head injury in the second half.

Forwards Thomas Mueller, Robert Lewandowski and wingers Franck Ribery and James Rodriguez, who were all rested for Saturday’s 4-1 Bundesliga win against Eintracht Frankfurt, were also put through their paces.

However, magazine Kicker claims Robben will not travel to Madrid on Monday after injuring his groin at the Allianz Arena.

Alongside long-term injury victims Manuel Neuer, Kingsley Coman and Arturo Vidal, Bayern will also be without centre-back Jerome Boateng, who also damaged his groin against Real.