The three-nation United States-led bid to host the 2026 World Cup outscored its rival Morocco as both passed an inspection of their facilities and infrastructure, global soccer body FIFA said on Friday.

The joint U.S., Canada and Mexico bid was given an overall score of four out of five by a five-man FIFA task force which evaluated the two bids while Morocco was awarded 2.7 in a 220-page report. A minimum score of two was required to stay in the contest.

The decision means that the hosts for the 48-team tournament will be chosen at the FIFA Congress on June 13, where each of the 211 member associations hold one vote, provided the two bids are first rubber-stamped by the policy-making FIFA Council.

The report said that “both bids have been deemed eligible on the basis of having met, or exceeded, the minimum hosting requirements for the 2026 FIFA World Cup technical evaluation.”

The U.S. hosted the finals in 1994 and bid unsuccessfully for 2022 while Mexico staged the 1970 and 1986 tournaments. Morocco has already made four failed bids to host the World Cup.

Morocco has proposed using 14 stadiums in 12 cities, all within a 550 km radius of Casablanca. Nine of those stadiums would be built from scratch and the other five would require extensive refurbishment.

The North African nation plans a total investment of nearly $16 billion, mostly on improvements to infrastructure which the bid says the country needs anyway.
The so-called United bid from the U.S., Canada and Mexico plans to use 16 stadiums across the same number of cities, to be selected from 23 candidates, and says it will help FIFA achieve new records for attendance and revenue.

It says that all of its planned stadiums already exist and have a capacity of at least 68,000. 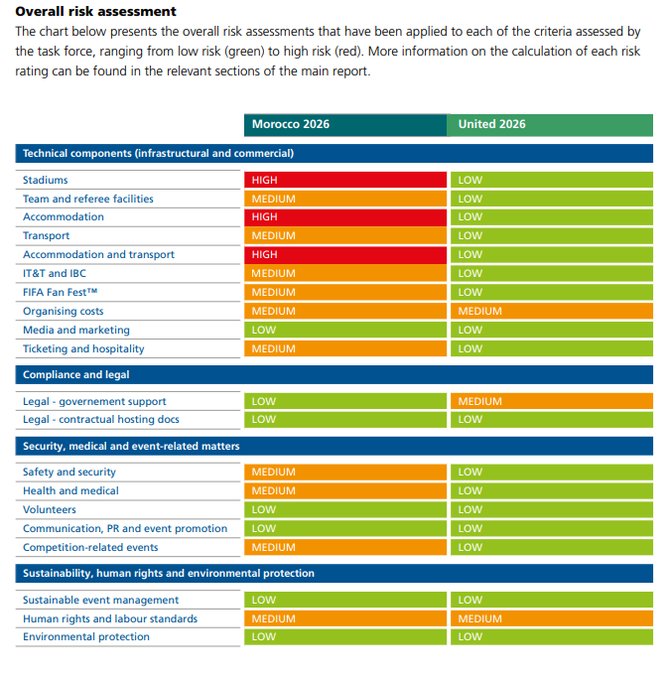