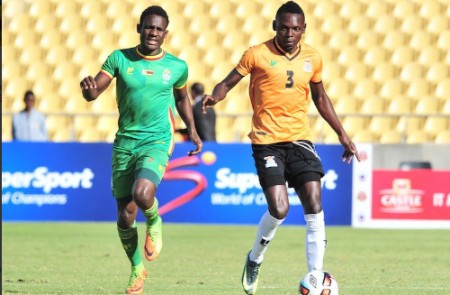 Regional heavyweights Zambia and Zimbabwe will go up against each other in Sunday’s 2018 Cosafa Castle Cup final after both teams dispatched their Semi final opponents to book a repeat of last year final.

Zambia stormed through to their ninth final with a 1-0 win over Swaziland while Zimbabwe needed a penalty shootout to dispatch Lesotho after the game ended goalless in regulation time.

Both semifinals in a double-header feature at the world class new Peter Mokaba Stadium reaffirmed the position of the two countries in the southern African footballing hierarchy after hosts, South Africa had been knocked out in the quarterfinals at the weekend by Madagasar.

Zimbabwe have the mist Cosafa titles (Five) while Zambia has the second highest just one shot and Sunday’s winner will go on to break the record for the most number of wins.

The two teams have also met a record time in the finals. Zimbabwe and Zambia clash in the COSAFA Cup final for the fourth time in six COSAFA Cup tournaments, with Zimbabwe having claimed victory in 2009 and 2017, and Zambia on home soil in 2013.

Zambia last won when they hosted the 2013 edition and Zimbabwe are the defending having beaten the same opponents last year in Royal Bafokeng.