The 2018-19 ABSA Premiership campaign will kick-off this afternoon, and several Zimbabweans in the league are set to take part in today’s action.

Khama Billiat who joined Kaizer Chiefs in July will face his former paymasters Mamelodi Sundowns in a season opener at Loftus Versfeld Stadium. Kick-off is at 3 pm.

The winger will feature against Sundowns for the second time in two weeks after playing in Shell Ultra Helix Cup a fortnight ago.

Team-mate Willard Katsande is available for selection, but defender Teenage Hadebe is a doubt for the clash due to a reported injury.

Hadebe is said to have picked up an ankle knock which could rule him out of match-day one, a scenario which is similar to what happened in the previous season. However, the extent of the injury is unknown, so is the time of his return.

On the other hand, Sundowns’ Cuthbert Malajila is still out, nursing an injury sustained last October.

Coach Kaitano Tembo will have his first assignment as a substantive SuperSport United coach against Cape Town City. His Zimbabwean counterparts Onismor Bhasera, Evans Rusike and goalkeeper, Washington Arubi are all available for the game.

Elsewhere, Terrence Dzvukamanja might get his ABSA Premiership debut when Bidvest Wits host Free State Stars. The former Ngezi Platinum Stars striker was unveiled on Thursday together with other ten new arrivals.

Captain Tapuwa Kapini will make a return to the top flight football when he leads Highlands Park against Kudakwashe Mahachi’s new side Orlando Pirates.

Mahachi moved to the Soweto Giants and is one of the top Zimbabwean signings during the pre-season.

Other players expected to be in action today are Polokwane City’s George Chigova and Walter Musona who will be playing Black Leopards, Golden Arrows duo of Danny Phiri and Knox Mutizwa come against Talent Chawapiwa and Elvis Chipezeze’s Baroka.

Chipezeza would be his first appearance if he features today, having joined the side in July from Chicken Inn. 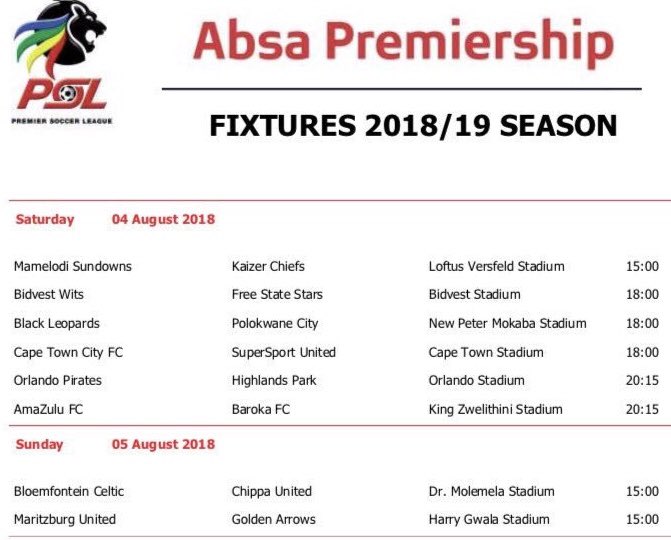