Highlanders suffered their second straight defeat when they lost 2-0 to ZPC Kariba in a match played at Nyamhunga Stadium on Saturday afternoon.

The Bulawayo giants had lost to Mutare City in the previous round and were hoping to bounce back and get a revenge on Kauya Katuruturu who halted their undefeated home run back in May.

The hosts were well disciplined from the start and grabbed an early lead through Tawanda Nyamandwe in the 16th minute. They doubled their advantage through second-half substitute Bornface Zuberi in the 69th minute.

ZPC Kariba are now in the 8th position with 36 points while Highlanders remain 6th on the log.

In Harare, Shabanie Mine held Caps United to a 1-1 draw in a match played at National Sports Stadium.

This was the Chinda Boys’ second draw in a row after they played to a goalless tie against Yadah in the midweek fixtures.

Amon Kambanje scored for the visitors as they got into the lead on minute 17 but a strike by Joel Ngodzo four minutes later levelled matters.

No team managed to get an advantage in the second half and the game ended in a stalemate.

Rodwell Chinyengetere netted a brace in the second period as the defending champions returned to winning ways having dropped points in the previous match-day.

Chinyengetere first found the back of the net in the 52nd minute before getting his second of the day on minute 75.

Pure Platinum Play are now on 62 points while second-placed Ngezi Platinum Stars who lost to Yadah in the capital remain on 57.

Zvikomborero Bizeki scored a late winner on the stroke of full-time to give the Church Boys maximum points. Madamburo’s Godknows Murwira could have broken the deadlock as early as in the 4th minute but was denied by the woodwork.

The derby match between Bulawayo City and Chicken ended in a 1-2 win in favour of the Gamecocks.

Nicole Mutatiwa and Darryl Nyandoro were on target for the visitors while Toto Banda scored the consolation for Amakhosi. 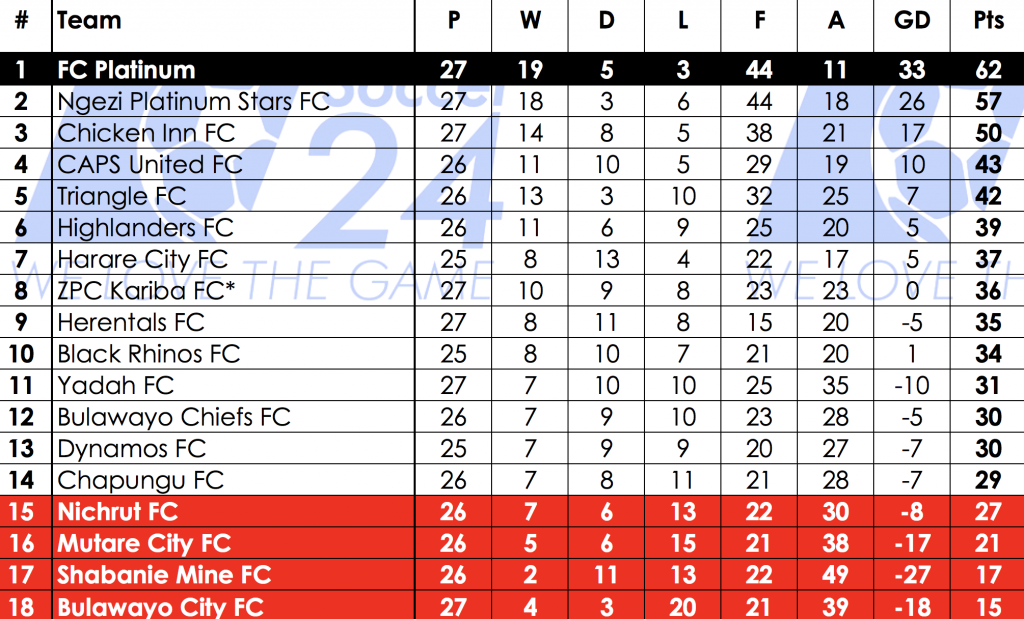