Dynamos move out of relegation zone after victory over CAPS United

Dynamos moved out of the relegation zone following a come-from-behind 2-1 victory over CAPS United in a rescheduled Match-day 24 encounter player at Rufaro Stadium on Sunday.

The Glamour Boys had gone for five games without a win, and the result will certainly boost their hopes of surviving the chop at the end of the campaign.

Makepekepe dominated possession in the first period but failed to create meaningful opportunities for the better part of the half. A half-hour mark effort from Valentine Musarurwa could have brought a difference, but goalkeeper Simba Chinani pulled a superb save to deny him.

CAPS, nonetheless, converted their territorial advantage on the stroke of half-time when Joel Ngodzo tapped in a loose ball after Brian Muzondiwa’s header had hit the post.

Dynamos went to the break trailing by a goal to nil.

The second half belonged to the hosts and they got an equaliser on minute 49 through substitute Kingstone Nkhatha who headed home Quality Kangadzi’s cross. The effort was Nkhatha’s first since joining the Harare giants in August.

Questionable changes by the Green Machine coach, Lloyd Chitembwe who took off Dominic Mukandi and Method Mwanjali and replaced them with Mitchell Katsvairo and Hardlife Zvirekwi also gave Dynamos more room to attack.

Dembare soon got into the lead courtesy of Valentine Kadonzvo’s spectacular volley in the 77th minute.

The visitors tried to get back into the game, but it was too late as the match ended 2-1 in favour of Dynamos.

At Maglas Stadium, Shabanie Mine played to a 1-1 draw against Highlanders.

Bosso had a penalty saved in the 17th minute after Peter Muzondo fouled Tafadzwa Sibanda inside the box. Adrian Silla stepped up to take the kick, but his effort was denied by keeper Biggie Temera.

The home team equalised on the hour through Fredrick Muza as it finished in a stalemate. 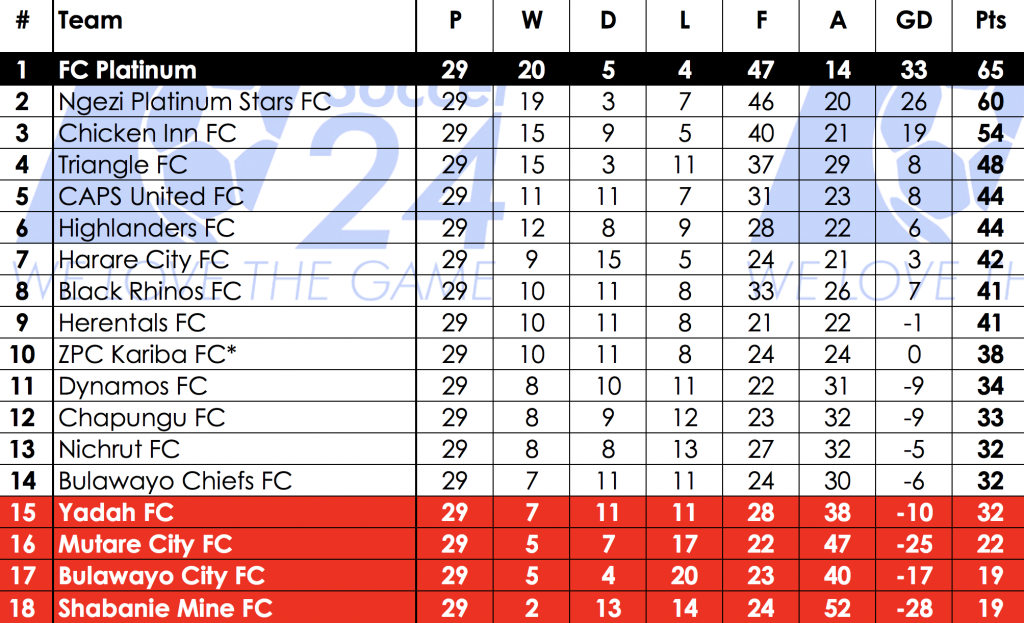