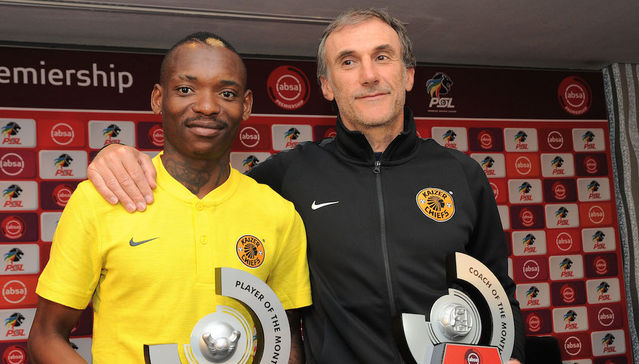 The gaffer was sacked in early December following a string of unconvincing results during his four-month reign at the Soweto Giants. He was replaced by German coach Ernst Middendorp.

In an interview with The Citizen, 30-year-old Cardoso said Solinas almost destroyed Billiat as he made him the “Messi” of South African football, thus putting him under immense pressure.

“I don’t think he (Solinas) had much of a plan. We’d be on the training grounds for three hours running against mannequins – there was no structure,” said Cardoso.

“Khama was the ‘Messi’ of South Africa for Solinas. And I think that got to him (Khama) as well and he thought he was the greatest… look Khama is a great striker, don’t get me wrong but you can see we went through a deep in form and he is now trying to recover. I think it was a case of giving too much confidence to one player and nothing to others.

Cardoso believes the pressure on Khama Billiat came after Solinas gave the player too many praises.

“You can’t put it all on one player’s shoulders, it’s a team. We are not playing tennis or chess, it’s a team sport, unfortunately. For us we couldn’t question him, he was the head coach.

“But bowing down to a player in front of the crowds and other players, it gives him more pressure because he knows he has to perform in every game and it’s not every day that you can perform something, it can’t happen,” added Cardoso.