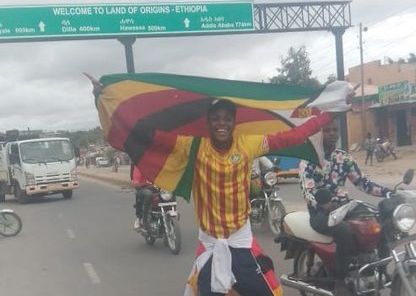 Alvin Zhakata says he was kept waiting for over seven hours at the Ethiopia-Kenya border despite securing all the required travelling documents to pass through.

The Warriors fan is taking a road adventure across the continent from Cape Town, South Africa to Cairo Egypt where the Afcon tournament gets underway this Friday.

His trip, however, has not been a smooth one and was stuck in Kenya for five days after he was denied entry into Ethiopia as he had no visa.

After getting the document on Monday evening, Zhakata was only able to pass through the following morning but was again delayed by the Ethiopian immigration officers until 3 pm, thereby missing the last bus from the border town.

He will have a sleep over in Awassa, before taking a 273km-trip to the capital city, Addis Ababa the following morning.

Giving an overview of the distance covered in Ethiopia so far, the Warriors supporter says travelling by road is a bit strenuous and have met numerous road blocks along the way. Communication has also become a frustrating barrier as English language is virtually unknown in the country.

Zhakata started the road adventure with his South African counterpart Botha Msila who gave up after getting frustrated at the Ethiopia – Kenya border.