The 45-seater luxury coach which Zimbabwe international Nyasha Mushekwi bought for his former club CAPS United is set to arrive in Zimbabwe at the end of October.

The Hanzhou Greentown striker, who reportedly splashed a whooping US$120 000 for the bus in appreation of what the club did for his career, said that it will first touch down in South Africa, where it will be branded with the team’s colors, then proceed to Zimbabwe.

“The bus is scheduled to arrive (in Harare) at the end of October,’’ Mushekwi told The Herald.

‘‘It will have a stop-over in South Africa, during its shipment home, for 10 days to get branded.That’s where the guys who wrap my cars are they are really good guys. We settled for the white colour to try and match one of the colours associated with the team.”

‘‘Of course, there will be some touches of green, and all this will be done in South Africa, but the most important thing right now is that the assembling of the bus, as per our specifications, has now been completed.’’ he added.

Here is the image of the bus. 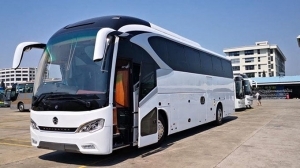