Kadewere receives his Player of The Month award

Warriors striker Tino Kadewere, who was named Ligue 2 player of the month for his exploits for Le Havre, was presented with the award last night.

The 23-year-old striker scored in six consecutive games for Le Havre, making him the division’s leading marksman with ten goals in total, seven of them coming in the month of August.

August was an unforgettable month for Kadewere, as he also broke a goalscoring record in the French second tier division, which had been standing for 8 years.

He was presented with the award before Le Havre’s 1-0 home defeat to Chateaoroux last night. 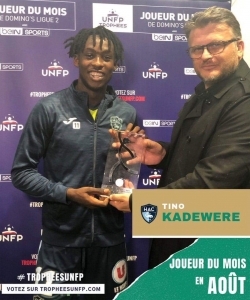